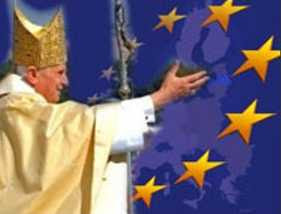 Behind the day-to-day business of politics, the vast majority of people can no longer recognise or fathom why things are going in one direction or another. Behind politics resides metapolitics, which forms the values upon which all political action is based, above and beyond party lines.

That, more than anything, is the true legacy of the European Union, which has destroyed any idea of linkage between electing a government and expecting it to deliver policies that are in the interests of the people who elected it.

The bishops' agenda, writes Cranmer, was clearly exposed when a COMECE spokesman said of their Spring plenary assembly that it had given bishops, "the chance to reflect on the fundamental question of how citizens' support for the EU can be mobilised and how this might be translated into concrete goals".

Cranmer also informs us that the COMECE Bishops acknowledged the achievements of Mgr Noël Treanor, Secretary General of COMECE since 1993, and his efforts "to assist the Catholic Church as a proactive partner in dialogue with the EU institutions".

That the Roman Catholic church is so evidently in bed with the European Union is disturbing, but it is just another cog in the vast network of influence that is subverting the political system, and what is laughingly called "civil society" in this country.

So deeply embedded is this political cancer that one fears that attempt to root it out will all but kill the patient.