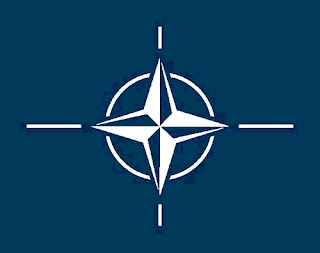 We have already written about one rather unfortunate aspect of the Bucharest NATO summit, Germany and France acting as proxies for Russia in internal discussions. I still find it astonishing that so many British commentators (Sir Malcolm Rifkind and Anatole Kaletsky via the excellent CharlesCrawford.biz spring to mind) found it necessary to applaud the situation and to emphasise how important it is that Russia’s worries should be taken into account.

When they say Russia, they mean the Kremlin and as Edward Lucas has pointed out in his book “The New Cold War”, the Kremlin menaces both the West and Russia itself. Pandering either to their foot-stamping bullying or to their whining victim mentality does not help Russia or the Russians. It helps the Kremlin and the siloviki in it to consolidate their power.

From the immediate point of view of Western Europe, Britain and NATO the worrying aspect is, as Mr Lucas points out in his book and in the many talks he has given on the subject, Russia’s ability to use her gas supply and her bullying tactics to divide and rule. We have now reached the stage that in matters of international politics some members of NATO and, let us recall, of the EU respond with the question “how high” when President (soon to be Prime Minister) Putin says “jump”.

Mr Lucas thinks that the answer is a stronger EU who will stand up to Russia on matters of energy security, that not being NATO’s remit. He advanced this theory again in very strong terms in a talk-cum-discussion that took place at a club for journalists on Tuesday.

Unfortunately, for Mr Lucas’s theory, in my opinion, and I did suggest this to him as well, his own examples belie it. Clearly, Germany, backed by France, possibly Spain and certainly the Benelux countries would like nothing more than putting pressure on the East European and Baltic countries in order to stop them complaining about Russian bullying and demands.

Equally clearly if the EU does manage to have a single voice on these matters, it is much more likely to be the voice of those “pragmatic” countries together with one or two others who have decided to succumb to Russian pressure. The only reason why Europe does stand up to Russia when that country’s leadership tries to throw its weight around, mostly to produce a sense of isolation and siege mentality among the people, is that the uppity Balts and East Europeans refuse to become part of a single European voice.

It would appear that NATO is now entering a similar phase. After the great Franco-German triumph of acting as proxies for Mr Putin came the more official statements that told a slightly different story of President Bush being closer to getting what the United States wanted than Chancellor Merkel and President Sarkozy, not to mention Prime Minister Zapatero may have realized.

This is not the first time that matters panned out in that way. As we wrote last November in connection with a projected trip to Washington by Chancellor Merkel, whose purpose was to sort out President Bush on Iran: 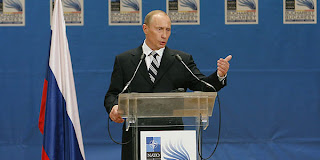 And so it came to pass. Who can even recall what that conversation was about?

In the same posting we asked where Britain with her then relatively new Prime Minister, Gordon Brown, was in all the negotiations President Bush was conducting. We might ask the same question now. Where does Prime Minister Brown stand on all the issues that split NATO in Bucharest a few days ago?

Meanwhile, Vladimir Socor of the highly regarded Jamestown Foundation has been parsing the outcome of the summit, with special regard to what it might mean to Ukraine and Georgia. He came up with an interesting analysis.

While postponing a decision on a Membership Action Plan (MAP) for those two countries, a plan, incidentally that does not mean membership but a long process towards it, as Russia’s proxies failed to make clear, the Alliance did commit itself clearly to “to the political and strategic goal of Ukrainian and Georgian membership in the Alliance”.

This is what the official statement said:

NATO welcomes Ukraine’s and Georgia’s aspirations for membership in NATO. We agreed today that these countries will become members of NATO. Both nations have made valuable contributions to Alliance operations. We welcome the democratic reforms in Ukraine and Georgia and look forward to free and fair parliamentary elections in Georgia in May. MAP is the next step for Ukraine and Georgia on their direct way to membership. Today we make clear that we support these countries’ applications for MAP.

There is no timetable for the membership application, much less fulfilment but there would have been no suggestion of a timetable with MAP anyway. For all of that, we have a definite commitment and a plan whereby the MAP application can be decided without another summit. The Foreign Ministers can do so by themselves, though it is likely that the German and French ones will continue holding out at the December 2008 meeting.

As Vladimir Socor points out this is the first time NATO has announced a political commitment to the future membership of two countries. This is not, one assumes, what Chancellor Merkel, President Sarkozy and their followers wanted. At present it looks like a victory for the supporters of Georgia’s and Ukraine’s membership and another blow to European solidarity with Russia losing another diplomatic round as a result of serious miscalculations on President Putin's part.

The following day Mr Socor returned to the subject. In it he pointed out that once again the new members paid a crucial part by refusing to align themselves with Old Europe:

The article gives further details of the way the countries lined up:

The new member countries’ informal alignment on this issue is a natural follow-up to the Vilnius Ten process, in which these countries had earlier joined forces as aspirants to NATO membership. Launched in 1999, the Vilnius Ten process culminated in the accession of seven countries to NATO as full members in 2004 (the Baltic states, Slovakia, Slovenia, Romania and Bulgaria). The group of earlier entrants--Poland, the Czech Republic, and Hungary--was closely involved with the Vilnius Ten all along. Two more participants in that process, Croatia and Albania, were invited to commence accession procedures at the Bucharest summit.

The new member countries regard Ukraine’s and Georgia’s future as a matter of vital interest to themselves and to NATO. In the run-up to the summit they signed, alongside Canada (the United States remained in the background), a joint declaration urging approval of Ukrainian and Georgian MAPs in Bucharest. Only the Socialist-led Hungarian government, engaged in a mini-Ostpolitik of its own, dropped out of that group and joined the anti-MAP countries at the summit.

Denmark was set to sign the pro-MAP declaration ahead of the summit, but the German Ministry of Foreign Affairs persuaded its Danish counterpart to delay that gesture. Danish political leaders, however, prevailed; and the country joined the pro-MAP countries at the summit, as did Iceland. Against this backdrop, the work of U.S. President George W. Bush throughout the summit made the decisive difference for opening the door to Ukraine and Georgia.

So we ask again, where is Britain in all this? After all, this is an important issue. Maybe not as important as Britain’s role in Basra but quite high up. There is the question of NATO and its future role; the problem of Russia, how to deal with her aggressvie bullying and whether she will be able to put pressure on NATO members; the problem of stability and security in Eastern Europe and the Caspian. Do we, as a country, have a view?

Not really, it would seem.

Britain remained on the sidelines throughout the presummit and summit debate. Prime Minister Gordon Brown told Bush that his government was for the MAPs in principle, but would not pursue the issue. Moreover, “We are agnostic--if there is a consensus, we would agree, but we don’t support pushing for it now.”

Well, that’s just the way one expects the Prime Minister of the United Kingdom to behave. Who would have thought that one might feel nostalgic for Tony Blair, who, at least, had some view on what he would like to see happening on the international scene. He was frequently muddled and found it hard to sort his thoughts out but he was aware of the fact that there were problems out there and they needed sorting.

For the first time in a very long period we have a Prime Minister who has absolutely no knowledge or understanding of foreign affairs. None at all.

While we are on the subject, where is our Parliament? Where is Her Majesty’s Loyal Opposition? Is this not the sort of subject that should be debated? This is not EU competence so it should be taken seriously by our politicians and more seriously by our media, though to be fair the Times did say in its editorial on April 4

In this debate, one voice has been notably, embarrassingly, absent. Gordon Brown, attempting to sit on the fence, has missed a huge opportunity.

But the editorial came to no particular conclusions either except to assume, once again, that the United States and President Bush somehow are in need of British advice and guidance.

So the saga of NATO’s relationship with Russia and the countries around her will be played out without British participation and, it would seem, despite much of Old Europe taking a somewhat pusillanimous position.

Polish President Lech Kaczynski has already stated “that he wants Poland to maintain its veto over EU talks with Russia regarding a new Partnership and Cooperation Agreement unless major West European EU states agree to put Ukraine and Georgia on a clear path to NATO membership”.

While State Duma Foreign Affairs Committee Chairman Konstantin Kosachyov is quoted as hoping that other EU member states will not back this “senseless” proposal, the chances are that Russia will not be able to manipulate the whole of the EU through its proxies as it has not been able to manipulate NATO precisely because these organizations do not speak with one voice.
Posted by Helen at 20:06