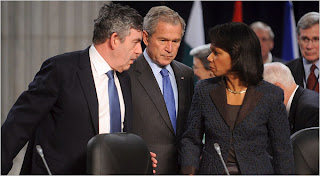 … and throw our allies to the Russians’ tender mercies. This NATO Summit has been a tad opaque and the precise agreements are still to be made clear. But the supporters of authoritarian Russia, sometimes disguised as opponents of world government but actually opponents of the West, can rejoice. Under German and French pressure NATO has thrown Ukraine and Georgia to the bear. President Bush’s attempts to put them on track to future and very distant membership of NATO has failed, though he is not, apparently giving up.

Germany, who is slowly putting itself completely into Russia’s hands by getting more and more of its gas and oil from that country, supported by France, whose supposedly pro-American president has reverted to type, managed to derail the process with support from other West European countries.

In effect, this is breaking NATO’s rule that no outside country can have a say in its composition. It is also ignoring the very real contribution that Georgia has made to the war on terror.

As AP rightly puts it, this was a big victory for President Putin, who is not precisely our ally and was achieved by a miracle of double-talk on the part of the German and French leaders.

While Russia has been selling arms to Iran Georgia has sent over 2,000 troops to Iraq. Stationed mostly in the Wasit province in the south-east, the force’s “main task is to stop weapons smuggled over the Iranian border from furnishing the arsenal of the insurgency”. Errm, one would expect to hear a bit more about that from the British around Basra.

No doubt this will be seen as a victory for those who are sane and sensible and do not want to see Russia unfriendly to the West. My own suspicion is that it will make absolutely no difference. Russia will now demand something else – perhaps pressure on the Baltic States – and will give nothing in return.

Suppose that country continues to be unfriendly? So what? What do we get out of friendship with Russia, anyway?

Nobody is suggesting a break in diplomatic relations. War is not on the cards, especially not with the Russian military machine in need of heavy overhauling.

Business relations are likely to go on souring because of the cavalier way with which the Russian government treats contracts with foreign investors.

That leaves gas. This needs a separate posting (another one) but the truth is that Russia as a purveyor of gas needs Western Europe as customer as much as Western Europe needs it. What will Gazprom do with the gas if it stops selling it? Drink it?

Sell it to China, I hear people say. Hmmm. Maybe. Sometime. In the future. When there is a pipeline. And if Russia produces enough oil and gas to satisfy the domestic market, fulfil existing contracts and open up new markets.

Combining state ownership with an authoritarian government has resulted in self-censorship, favor-based promotions rather than competence-based promotions, and power struggles between competing clans that are holding back progress on a range of projects in exploration, production, transportation and refining, the analyst said.

Reflecting that, only one new gas field - the Zapolyarnoye field, which came on stream in 2001 - has entered production since the 1980s, while various energy transportation projects are behind schedule, including the East Siberia-Pacific oil pipeline - now set to open a year later than planned, at the end of 2009.

Another country that has not been particularly pro-Western but is always demanding favours is Greece. Right now, it is demanding that Macedonia not be admitted to NATO until it changes its name because its refusal to do so shows that it has designs on parts of Greece. Nobody but the Greek political establishment has managed to notice this fact but the foot-stamping was enough for NATO not to invite Macedonia to become a member as Albania and Croatia have been, until it sorts out the problem of the name with Greece.

One could argue, and probably this blog would do so that taking in various countries who cannot contribute much to NATO and whose security services are dubious is not the best idea. But this decision should not be taken because Greece throws another wobbly.

Still, one victory was achieved and it is surprising that all those who tremble at Russia’s displeasure have agreed to it. Perhaps, President Bush can manage the odd diplomatic agreement.

President Bush won NATO's endorsement Thursday for his plan to build a missile defense system in Europe over Russian objections. The proposal also advanced with Czech officials announcing an agreement to install a missile tracking site for the system in their country.

There will be further news from this summit but I cannot wait to hear Chancellor Merkel and President Sarkozy extol the Europeans standing up to the United States as being the birth of a common foreign policy. If they can remember, that is, what famous victory they achieved.
Posted by Helen at 20:36