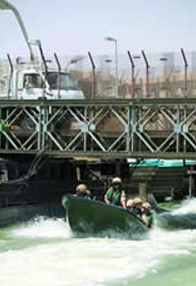 Analysis of strands of information coming out of southern Iraq puts a different and sinister complexion on the events leading to the murder of four British service personnel on the Shatt al-Arab waterway last month. It suggests that the Iraqi police may have been complicit in the incident, and that the British authorities knew that personnel using the waterway were at risk – and failed to take any action.

The first strand comes a disturbing report published by the Belfast Telegraph, telling us how the Iraqi police were probably directly involved in the murder of a British sergeant. He was one of the many servicemen killed by a roadside bomb last year, while riding in a Snatch Land Rover.

The soldier was John Jones, 31, of the 1st Battalion The Royal Regiment of Fusiliers. Just weeks into his second tour of Iraq, he was killed by a roadside bomb as he commanded a routine patrol in Basra. Four other soldiers were injured. Just a week after the anniversary of his death, Jones's parents received a report from the Army that appeared to suggest his killer or killers may have been among the same Iraqi security forces the British have been training.

Describing the moment of Sgt Jones's death on 20 November 2005 as his patrol was heading back to the Shatt al-Arab Hotel, it read: "It was observed at this point that there were a number of unknown Iraqi males wearing Iraqi Police Service and military uniforms and that they were observing the scene from the Port Authority area. An Iraqi Police Service car was seen to turn around and head away from the scene, back the way it had come."

The conclusion from this and other evidence was that the police had been responsible for the bombing and, furthermore, Sgt Jones appears to have been just one of several British soldiers murdered by Iraqi police.

What was perhaps most damning about the murder of Sgt Jones is that the evidence was passed to the Iraqi police as a matter in their jurisdiction, but no action was taken. Undoubtedly though, the incident was one of the many that has created an atmosphere of distrust between the British Army and the Iraqi police.

This can only have been reinforced by a report on 23 October of four Iraqi policemen having been found with a roadside bomb in their patrol car. They were arrested by British troops and handed over to the civil authority, but later released without action.

But, if that tends to affirm that Iraqi police are responsible for insurgent attacks, we also have diverse reports, one cited here which suggests that half or more of Basra police might belong to the local militias and only a quarter could be trusted.

Next, from this month's edition of Soldier magazine that, in an event apparently prior to the November bomb incident, soldiers "patrolling" the Shatt al Arab waterway came under fire from a bridge. Up to six gunmen opened fire on a four boat convoy, led by Sgt Kev Cameron, and a ferocious gun battle ensured. Soldiers reckoned to have shot at least one of their attackers dead.

Crucially, though, there was speculation at the time that the terrorists may have been trying to plant a bomb and the intervention of the boats managed to disturb them while they were in the process of so doing. 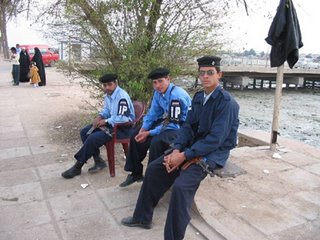 The final strand in this exercise comes from local unpublished reports that, while soldiers knew boats passing under the bridges were highly vulnerable, because of the policy of progressive hand-over of security matters to the Iraqi police, there were no British Army guards on the bridges and no specific Army patrols. Instead, security was left to the Iraqi police, who had guard posts on all the main bridges crossing the Shatt al-Arab.

So, putting this together, we have a situation where the local police are known to be untrustworthy and have been implicated in the murder of British soldiers by the use of roadside bombs. We also know of evidence that officers had possession of improvised explosive devices. We have indications that one bridge might have been targeted as a site for an IED (suggesting that all might be at risk) and we know that the land-side security was in the hands of the local police.

On that basis, it seems entirely fair to suggest that the boat traffic on the Shatt al-Arab was at extreme risk and, if the soldeirs were aware of the risk, so must have been the military authorities. The bombing on 12 November, it seems, was an incident waiting to happen.

Needless to say, the government is extremely reticent about disclosing any details – and it goes almost without saying that no attempts to pursue the matters have been made by the Conservative defence team in the Commons. However, Lib-Dem MP Mike Hancock has asked the secretary of state what risk assessments had been carried out "with regards to personnel transfers on the waterway prior to the fatal attack".

Predictably, Des Browne was less than forthcoming in his reply, telling us that "we take the threat to our forces very seriously...". But not, it seems, seriously enough. 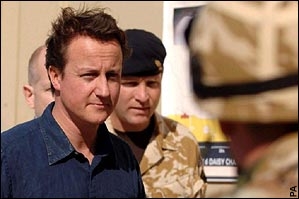 All Browne's reply does, in fact, is confirm that the UK government is consistently giving over-optimistic assessments of progress on the ground in southern Iraq. And, unlike David Cameron, we did not need to fly to Basra at enormous expense to find that out. Yet this is seemingly the main finding of his recent trip.

What this points up is the difference between analysis and crisis tourism. The former gets you the answer sooner, with the background evidence, while the latter simply makes you a vessel for someone else's opinion. But it also gives you apparent authority, by virtue of having been there – as if a visit to a protected airbase outside Basra would actually tell you anything of the situation in er... Basra city.

Nevertheless, in political discourse, the "whenneye..." ploy is still extremely powerful, despite being ultimately meaningless. It is relied upon by a procession of politicians and other crisis groupies, who so often dine out on the proceeds of others' endeavour.

In analysis, however, the strength comes not from the intelligence of vicarious politicians, but from linking facts and events, often separated in time and space, to form new conclusions, confirm existing ones or to raise new questions and directions of study.

Sitting at a computer screen many miles from the action sometimes brings a clarity that is not possible at the scene. And, if there are no answers to be got from the process, there are certainly plenty of questions.