More turbulence on the Eastern Front 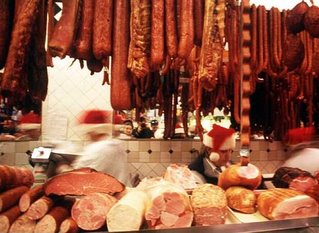 This week-end's Wall Street Journal Europe [subscription only on the web] ran a short article under the title "EU-Russia tensions rise as meat fight gets hotter". Well, no, we are not talking about meatball frying competition but the fact that the Russian government has announced that it will not import Polish meat and may ban all meat from the EU in 2007 as they cannot be sure some of it will not be from Bulgaria or Romania.

If, on the other hand, some countries will assure them that the meat being sold to Russia definitely do not come from those two countries, they will be exempt from the ban. To show that they do, indeed, mean business, they invited German and Irish officials to discuss the situation, who stated that they will continue negotiations but will also continue to follow "the European Commission's lead on trade policy".

Commission spokesman, Philip Tod, is not amused and neither are his masters:

We told the Russians that we did not think it was acceptable to only have contacts with some member states. Russia should be talking to the EU as a whole.

Brussels-based analysts are telling us huffily that the Russians are exploiting differences between member states and picking on weak points in the project, concentrating on matters to do with energy and agriculture. Well, shame on them. Of course, nobody seemed to complain when Russia was exploiting differences between the United States and various European countries, trying to drive a wedge into the supposedly strong Western alliance.

The Russians' response is that "a continentwide agreement is impossible, because any one country from which Russia refuses to buy meat could veto it". They have a point and many of us have been saying so for a long time. An EU-wide international trade policy is likely to produce more tensions than agreements between individual states could and the much-discussed common foreign policy is a potential catastrophe.

On the other hand, it is noticeable that Russia suddenly decides not to buy meat (or wine or any other produce) and not to sell gas or oil to countries they wish to "influence" in various ways or punish for opting to be pro-Western. This ought to give the Germans and the Irish something to think about but the possibility of signing agreements at the expense of other countries appear to be too tempting (rather like in the days of old-fashioned nation-state politics before the glories of European integration).

Given Russian shenanigans over the development of oil and gas inside the country and rather flexible attitude to agreements and contracts (the word Shell springs to mind) those eager negotiations that Germany in particular is indulging in may be akin to the young lady's desire to ride an apparently friendly tiger.

It is rather a pleasure to see Russia back where it belongs, among the West's enemies. I take particular delight, having written about these developments for some time, pointing out which way the country was going and having my warnings ignored or dismissed with a light chuckle. So, who's laughing now? President Putin, that's who. For the time being.