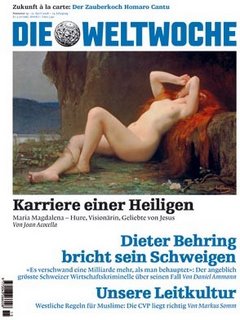 A few weeks ago I was told by Markus Somm of Die Weltwoche, the only eurosceptic and free-market publication in the German language according to him, that the main reason the Swiss continue to oppose membership of the EU is their attachment to their own form of democracy, which, some people argue, is the truest form there is in this imperfect world of ours.

Certain statements from the Commission are clearly meant to reinforce that Swiss dislike and distrust of the European Union. Otherwise, it is hard to see, why they make such statements.

According to the European Commission, the Swiss tax system is "incompatible" with the 1972 free trade agreement between Switzerland and the EU because it distorts trade within the bloc.

The EC takes issue with laws that allow local cantonal governments considerable freedom to set their own levels of taxation in a bid to attract international holding companies and high-net-worth individuals to relocate in Switzerland.

Without going down that well-trodden route of whether tax competition “distorts” trade (it doesn’t), let us look at the logic of that comment. Two entities sign a free-trade agreement. Trade, not anything else. One of those entities persists in having idiotically high taxes, whereas the other allows its own members to set taxes in accordance with what they see as beneficial. Well, duh! Clearly, that agreement forbade the setting of taxes locally, even though it was actually about trade.

Understandably, the Swiss gave a robust response. Michael Ambuhl, a senior official in the Swiss Foreign Ministry refused to give in to the EU’s bullying:

"Our position is absolutely clear," he stated, according to Swiss Radio, continuing: "The cantonal taxes do not constitute a subsidy – indirect or direct – to the exchange of goods, and as such do not affect the free-trade agreement."

Indeed not. They are, in fact, locally decided taxes, at the closest possible level to the people whom they affect. Ahem, don’t we keep hearing about the need from that from the Commissars, such as the fragrant Margot?