I could not resist this 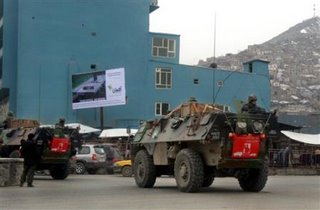 ...in a bitter sort of way. The picture shows French armoured vehicles in Kabul today, escorting a convoy. The red signboards at the back say, "Please do not overtake the military convoy".

The vehicles themselves are the Véhicule de l'Avant Blindé or VAB ("Armoured Vanguard Vehicle") an armoured personnel carrier manufactured by the Euro Mobilité Division of GIAT Industries of France. 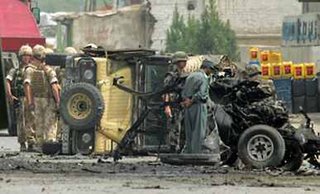 Under normal circumstances, the picture would be just a curiosity, of interest mainly to military equipment nerds. But what is significant is the contrast with British equipment. In Kabul, to escort our convoys, our troops are given "Snatch" Land Rovers. And they die.

The odd thing is that, the VAB actually entered service in 1976. Around 5000 were produced and, as the photograph shows, it is still doing good service. It is not ideal, not modern, but it does a much better job than any armoured Land Rover can do, or the stupidly expensive Pinzgauer coffins on wheels which will be introduced in the new year.

As we rather sadly remarked earlier, we seem to be going backwards.