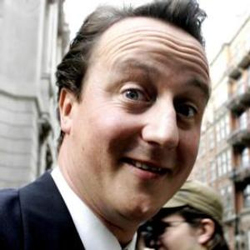 If this wasn't a family blog, the title would be a lot, lot stronger believe me – although we always say that resorting to swear words simply displays a lack of vocabulary and imagination. Ripping someone to shreds without resorting to such low tactics, we say, is a refined art that takes considerable practice and skill.

That said, I am going to rip the throat out of that detestable, smug, self-satisfied little turd – unfortunately, only metaphorically. How dare he! That closed-minded, ignorant, fatuous little prat. He needs to take his head out of his backside once in a while and look around, once he's cleared his own shit out of his nostrils. Then he should turn round and crawl back in his little hole and pull the lid down over him and never, ever re-appear.

And the provoker of this invective? Need you guess? The Boy Wimp scores again, with an interview in The Telegraph, heralded by a front page piece entitled: "Cameron to Tories: Back me or we will lose again". 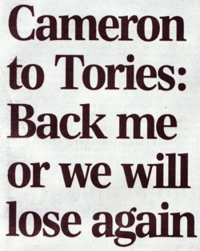 To that I say to Cameron, in the style of Tonto to the Lone Ranger in that famous joke: "Who's this 'we' white man?". "We" will not lose again – you will lose it for us, you tosser. You and the phalanx of dim, dismal sycophants around you who are so wrapped up in their own egos that they actually think they know something of this world and the people in it – ye preening, posturing creatures of less value than the low-life scum that inhabit the increasingly lawless streets.

The full text of his interview is here, the full horror of which emerges as you read and re-read it, pulling the meaning from it, revealing a vain, empty little man in a position far above his ability to sustain.

But what brings on the red mist is the blithe assumption of this poltroon that all that went on before his foetid little ego got on the scene was "outdated", simply a manifestation of "idle thinking" which the party must ditch. About some specifics, he says:

What this amorphous slime doesn't realise – is not even capable of realising – is that outside his Notting Hill love-fest, there are a lot of people who have been doing nothing else but thinking, people a lot more capable than he, people who put a great deal of effort into hard, detailed policies, the like of which are as far from "idle thinking" as the Boy is from having a brain. 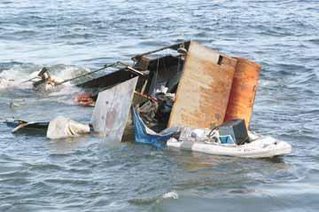 I speak, of course – but far from exclusively – of the fishing policy devised by Owen Paterson, the skill and subtlety of which is such that it is still not recognised by the bulk of the Eurosceptic community, for whom it was devised. Based on the principle of reverse engrenage – as well as being a superb technical policy - it was our ticket out of the EU and a reversal of the devastating effect the policy is having on our fishermen and their dependants.

The EU dimension is, of course, why the flaccid Boy had to ditch the policy, which he did as one of his first acts on stealing the leadership of the Party. But such is his moral turpitude, he did not even have the guts to declare this, leaving the news to drip out through his aides, the slow-motion realisation reducing the impact of his betrayal.

But in other areas, we also worked on policies. On Bovine TB, for example, which is set to cost taxpayers £2 billion – YES, TWO BILLION POUNDS – for not eradicating the disease, we devised an incredibly advanced scheme based on cutting-edge science which would have squared the circle, satisfying the genuine animal welfare lobby and the farmers, bringing to an end a disease which is causing havoc in the countryside.

Of course, this is part of the real business of government, something on which the Notting Hill dick-heads are far too grand to soil what passes for their intellects. So into the dustbin labelled "idle thinking" went that policy too, to the despair of the dozens of very expert and dedicated people who worked countless hours to produce it – people who saw hope in a rejuvenated Conservative Party and who will never, ever vote Tory as long as Cameron is even a smear on the face of this planet.

The man is a total, absolute loser. "I don't go out to annoy...", he tells the Telegraph. Well, we have an answer to all your problems Dave. Stop breathing. You owe it to yourself - to everyone. And think of the carbon you will save.