They get paid for this? 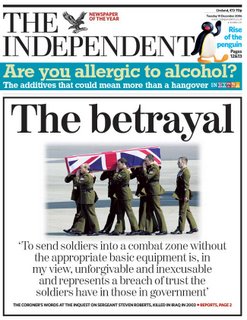 On the back of the coroner's report on the death of Sgt Steve Roberts, we see over a hundred links in Google News, all the main media outlets running the story. Very few though take the story beyond simply reporting the facts (or their version of them).

The Independent, however, makes a meal of the story, giving over its front page to the Coroner's words and making them its main story.

It then has one of its journalists, Nigel Morris, list the troops' "grievances". According to this gifted hack, "Pay/allowances" comes top of the list, followed by "Recruitment/retention" and then "Mental illness". Last (and least) comes “Equipment”, which includes a mere two items:

The standard-issue army rifle, the SA80 A2, has been dogged by problems, particularly when salt-water and sand interfered with its mechanism. The rifle has been upgraded but complaints persist.

A quarter of British soldiers killed by hostile action in Iraq were travelling in "snatch" Land Rovers - vehicles designed for Northern Ireland rather than the arid conditions of Iraq and Afghanistan. They are bullet-proof, but provide no protection from improvised roadside bombs.

That is it? That is all a British national newspaper has to offer by way of a critique of military equipment deployed in Afghanistan and Iraq? And that was from the only newspaper that even made an effort. No wonder we have problems.

More to the point, when it comes to "betrayal", newspapers like The Independent (but also the rest of the media) should be looking in a mirror. Only through their laziness and inadequacies (alongside the politicians) is the government able to get away will failing to equip troops properly.

As an exercise, I wrote out a list last night of what I would like to see supplied to our Armed Forces. Later today, I will illustrate this and post it, with a link to this piece. Call it a list for Santa.