A useful quote (not!) 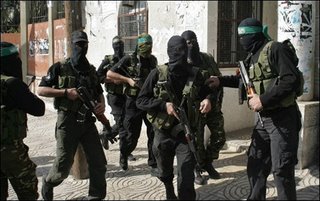 There may be a civil war in Iraq but not in Gaza. Or so one would gather from the MSM. The fact that the place is disintegrating with at least two factions shooting at each other and casualties rising seems to mean nothing.

Furthermore, a number of the casualties are children and teenagers. So, you would expect organizations like International Solidarity Movement (they of the ineffable Rachel Corrie)to be there, protesting, standing in the line of fire, protecting Palestinian children. I may have missed it but ISM has not said anything on the subject.

Never mind, the various Palestinian politicians have been making statements of horror and blame for each other. In particular I liked this paragraph in the New York Times

The Hamas interior minister, Siad Siam, said that "the security situation is very tense due to the political conflict and to the incitement campaign and accusations." He called on all factions for "a political decision to stop this deterioration," adding, "We're seeking to put an end to what is happening but it's not as easy as some think."

Ahem, who thinks that?