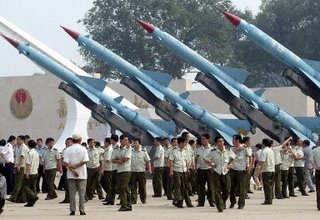 The EU is "to work on lifting arms embargo against China" says the Chinese state controlled news agency Xinhuanet, following the meeting in Brussels yesterday of the foreign ministers of the 25 EU member states.

This comes at a time when the US is already nervous about the leakage of weapons technology from Europe to China, which accounts for its reluctance to release source codes for the Joint Strike Fighter.

Actually, though, the headline seems more optimistic than is warranted, as even Xinhuanet concedes that the matter was discussed only briefly while the ministers had lunch and, according to EU spokesman Nicolas Kerleroux, there was "not much progress" on lifting the ban.

The IHT is perhaps more realistic in its assessment of the talks, headlining its report, "EU declares a strategic partnership with China, but signals arms ban stays".

Nevertheless, when Lord Drayson is in Washington pleading for the release of source codes, the very fact that EU member states are even discussing the Chinese arms embargo serves to remind the Americans how closely EU member states are already working with China on a number of strategic projects. The Chinese involvement in the EU's Galileo satellite navigation system is but one example.

Coming at this particular time, therefore, these discussions are not exactly helpful.