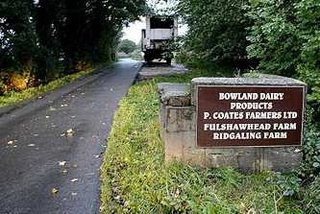 Although we think the EU is dead man walking, it still has plenty of scope for doing damage and will continue to do so until its is finally destroyed and its body parts scattered to the winds.

An example of that damage is offered by Booker today in his severely truncated column which tells the story of how the EU commission shafted cheesemaker John Wright, owner of Bowland Dairies in Nelson.

This has been reported by the MSM, but badly, so much of the new detail for the story came from a debate in the House of Lords initiated by Lord Willoughby de Broke on 6 December. It was, of course, ignored by the rest of the media.

What comes over in the debate is the craven attitude of the member states and the British government, the latter having clearly disagreed with the commission's action. It left Lord Willoughby to conclude that, even though the government does not agree with what the commission has done… "we will have to comply anyway because of our so-called treaty obligations through our membership of the European Union."

That, says Willoughby, is not an attractive story.