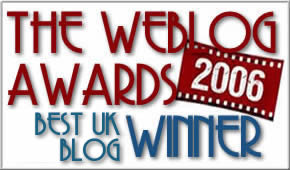 It brought out the best in some, the worst in others and evoked some ill-natured comments, the like of which saddened us and diminished its authors.

And we did walk away from it. The idea of a single award for the best UK blog is highly fraught. Readers are being asked to compare totally different concepts from a limited group of entirely unrepresentative blogs and make impossible judgements. Inevitably, therefore, the contest became a tribal war.

In the end, it was resolved by the intervention of our bestest friends in the United States, rather in the manner of "my daddy’s bigger than your daddy", although I doubt Charles would be happy with that handle. 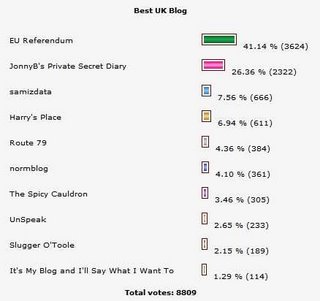 It is rather fitting, though, that Samizdata gained exactly 666 votes, and I am sure the gifted writers on that blog appreciate the joke.

Nevertheless, we do not even begin to believe that this award actually means what it says on the wrapper, and we are not sure that we will be able to take up the prize of one complimentary basic registration to the Blog World and New Media Expo. It just happens to be in Vegas, USA. Presumably, the second prize was two basic registrations…

Anyhow, with all the caveats, it was a competition and, since we were entered, it was best to win it, which we did. We held off announcing it until it was official and we had the award logo, which we only received this morning. Now we have it safely on the hard disc, we can indulge in a tiny bit of crowing before getting back to work.

Thank you everybody who voted for us.