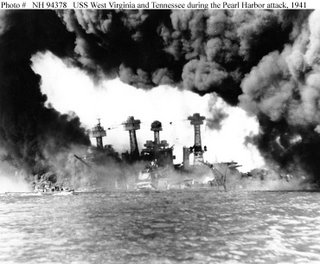 It's the 65th anniversary of Pearl Harbour and I got there before my colleague. Historian overtakes expert on military toys.

Here is an interesting question: after the Japanese attack on the United States, Germany declared war on that country as well. As it happens, Hitler could have gone the other way. He disliked America and all it stood for but, given his views on race, he could not have been all that fond of the Japanese either. What would have happened if he had allied himself with the United States and declared war on Japan? Or stayed out of the conflict in the Pacific? (OK, that's two questions.)