They can stick their blue flags .... 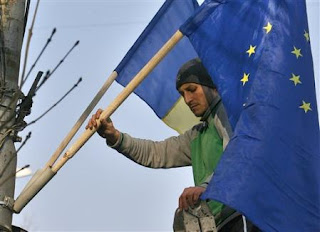 At midnight tonight, with the dawn of the New Year, Romania and Bulgaria join the European Union, bringing it to 27 members. But that means more than them joining a cosy little club. It means that Romanians and Bulgarians have the right to enter our country. They do not, as yet, have a right to work here – unless they are self-employed – but who is checking?

It does mean, though, that their governments become part of our government. Romania and Bulgaria will supply officials, high and low, to the EU commission, which makes decisions on how we in England are required to run our affairs. Their ministers join the Council of Ministers, which decides which laws are adopted, and their heads of government become members of the European Council – and decide on "European" political strategy. For that privilege, we also pay several more billions into the kitty.

The funny thing is, I do not ever remember being asked - not by my government or anyone else - if I wanted Romania and Bulgaria as part of my government, giving their officials the right to decide on the laws that affect me. And do I mind? Hell yes! I do mind, very much indeed.

Accordingly, I will not be welcoming the latest new members into the "club". I would sooner they and all the rest celebrated our departure from it. In the meantime, they can - as the song goes - stick their blue flags up their .....