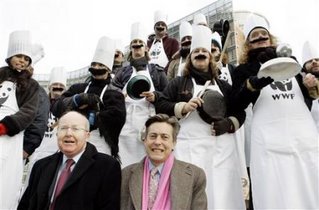 As some fish stocks in the British waters continue to decline, fisheries ministers are meeting in Brussels for the annual farce that goes under the name of quota allocation. They will emerge bleary-eyed this morning with another fudge that will drive stocks down further and fishermen closer to extinction.

The net result (no pun intended) really doesn't bear thinking about – it is so depressing. But three things can never be said too often. First, the preservation of stocks in a commercial fishery is a function of management. Second, the EU's Common Fisheries Policy is, primarily, a fisheries management system. Third, it has utterly and dismally failed. Even the EU's best friends will not deny that.

And, if the EU cannot get one of its longest-standing policies right, why should anyone have any confidence in anything else it does? That is the real significance of the CFP. Cameron was extremely unwise in ditching the Tory commitment to junk it. As the policy moves to the end game, with the almost total destruction of the British fishing industry, it will come back to haunt him, again and again.

Meanwhile, the picture shows two of the industry's executioners: Ben "dover" Bradshaw (with the pink scarf), the fisheries minister, and Ross Finnie, his useless Scottish clone. They are posing with idiots from the WWF, dressed as chefs for reasons best known to themselves, as they demand fishing ground closures and drastic catch cuts.