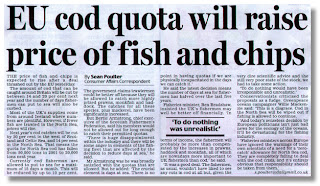 Before we leave fishing, for the moment – clouded in our usual miasma of gloom and doom – we could not help but remark on the crass treatment of the issue by the Daily Mail today.

Under the by-line of Sean Poulter, Consumer Affairs Correspondent, we are told that the amount of cod that can be caught around Britain will be cut by between 14 and 20 percent next year. Most UK supplies come from around Iceland "where numbers are plentiful", burbles the egregious Poulter, but… "if fewer fish are trawled in the North Sea, prices will rise".

Now, let's see. According to this source, this one and especially this from the Frozen at Sea Fillets Association (FASFA), landings from British waters account for less than ten percent of cod consumed in the UK. 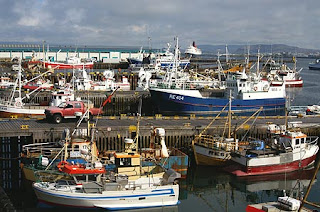 This was why the FASFA was set up - in September 2000 – representing trawler owners, importers and distributors of "Frozen at Sea Fillets" in the UK, Norway, Iceland, Faeroe Islands, UK, Russia, Germany, France and Spain. It works, "to actively counter current negative media coverage and reports about North Sea cod, which represents less than 10 percent of cod consumed in the UK."

In fact, according to the answer to a Parliamentary question posed by former shadow fisheries minister Owen Paterson:

This was publicised by the Booker column in February 2005 and, as far as we are aware, the situation has not changed. 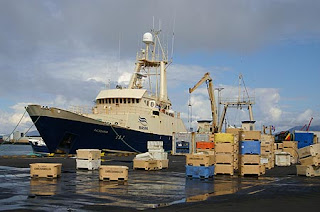 So, if we lose 20 percent of five percent, that accounts for a one percent drop in cod landings – just supposing that the loss cannot be made up from the Faeroes, Norway and Iceland, "where numbers are plentiful".

But such does not percolate the dim little brain of Poulter, who continues to draw a handsome salary from the Mail. Of course, he could have earned it by asking why "numbers are plentiful" in Iceland, which has a healthy, expanding fishing industry (as the pictures show), while the British industry is falling apart.

However, this is the MSM we are talking about. To come up with a half-way intelligent explanation might actually require a little bit of work – and that would never do.