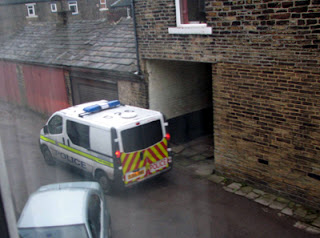 It is so rare that EU Referendum gets a police patrol down our cul-de-sac - except when they come to arrest yours truly - that it's a really noteworthy occasion.

But, we learned from our neighbour opposite, they were not patrolling at all. they were looking for a chap called "Gordon", who had had his garden shed broken into. The constable had no second name for the man, no address and was knocking on doors to find out if anyone knew of him.

I suppose we ought to be grateful that someone will turn out on a Boxing Day afternoon to investigate a crime - but you do wonder what you are paying your taxes for. Thus, when you read reports that Britain spends more of its national wealth on law and order than any other industrialised country yet still has a higher crime rate than most, this does not come as a surprise.

Furthermore, this isn't the first time we've had this sort of time-wasting farce. About six months ago, they were here mob-handed, blue lights flashing, to check out a report of a man being beaten up. They had the address that time, but had come to the wrong street.

You can perhaps see why we think the Army would be better employed over here. Blowing up a few police stations could hardly lead to an increase in crime, and it would certainly save a great deal of money. We'd also see more policemen on the beat, as they would have nowhere else to go.