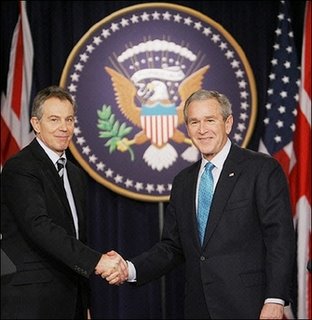 The man has an uncanny gift for losing it. At a time when Iraq and the "war on terror" was centre stage, with Blair in Washington meeting Bush, the Iraq study group report on the table and General Sir Mike Jackson doing his best to act as an opposition party to Blair's government, the Boy King scuttled off to Brussels to tell the EU commission how wonderful it is and how it must use all its powers to combat climate change.

The Boy's greenie agenda is so much at one with one with the EU's - both of them stoking up and then exploiting public concern for their own reasons - that it was only a matter of time that their agendas should converge and there should be an open love-fest. But, as always, the Boy's timing is wrong and his sense of priorities badly askew. Was he not justifying the urgency of his visit to Basra last week on the basis that he needed to have been there before the Iraq Study Group Report was published?

And now that the report is out, and the debate is running, Cameron is nowhere to be seen on the issue.

Meanwhile, as the "professionals" in the media continue to laud Jackson, the real people in the letters columns and elsewhere are distinctly less than complimentary. Within the Army and those around it, "Macho Jacko" is generally regarded as having been a disastrous CGS. The only problem is that the "professionals" are getting it wrong again. While they laud Dannatt, the indications so far are that he is not much better.

And from the Conservative opposition team? We get a few ritual whimpers about "overstretch" and then Liam crawls back in his box. FRES? Restructuring? Equipment? Nah... clearly, now that the Tories are in love with a greener EU, they don't "do" defence.