On such a slender thread 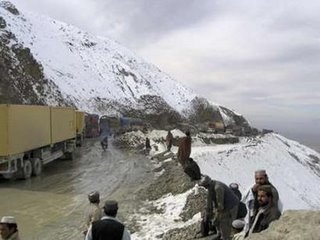 One picture is not always worth a thousand words. It may even need a thousand words to make sense of it. This picture is an example. Striking though it is, does not tell the story – it needs words to put it into context, although not as many as 1000.

According to Reuters, who provided the caption, this shows transporters and labourers awaiting the reopening of Pakistan's Kojack Pass, which was shut down by the first fall of snow yesterday.

We are told that the closure brought to a halt all transport between Pakistan and Afghanistan. Daily, hundreds of trucks laden with cargo bound for Afghanistan use the pass to enter the Afghan town of Spin Boldak from Chaman.

But this is the "killer" line. The Kojack Pass is the main route used to supply fuel and other logistics to Nato forces in Afghanistan. And on such a slender thread depend the success or failure of the war effort. Even with our technology and everything else, General Winter is still a dominant player.

Incidentally, it might have been Napoleon who coined the phrase but Tsar Nicholas I had a similar idea. In 1854, amid the Crimean War, he said he would let Generals January and February look after the French and British invaders – although, ironically, Nicholas died in 1855, reportedly from a chill caught while reviewing troops at the front.

This time, will it be Nato that catches the chill?