Can't keep a bad man down 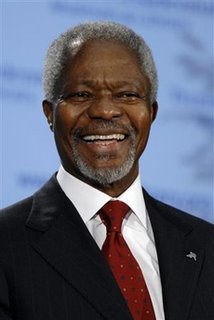 SecGen Kofi Annan (father of Kojo) is has been indulging in his favourite occupation: knocking the strongest democratic country in the world, the United States and, of course, by implication, the whole concept of accountable, constitutional democracy. The world should be run by unaccountable, unelected and untouchable tranzi operators like the SecGen.

Speaking in Harry Truman's Presidential Library, Independence, Missouri, the SecGen heaped praise on the 33rd President, who has been safely dead for some years. (Though, I suspect, he may be turning in his grave at the SecGen's shameless hypocrisy.) What a great man, Kofi Annan thinks, not like the present administration.

"More than ever today Americans, like the rest of humanity, need a functioning global system through which the world's peoples can face global challenges together," Annan said. "And in order to function, the system still cries out for far-sighted American leadership, in the Truman tradition."

Well, of course, America did not "go it alone" either in Afghanistan or in Iraq but built up a coalition of the willing. Nor did America "go it alone" when it provided speedy and efficient help in the wake of the tsunami. It had Australia, India and Japan as close allies - as fine an example of flexible coalitions being constructed when needed and for as long as needed, while the various tranzi organizations led by the UN created lots of commissions, sent observers who demanded special treatment from the soldiers and sailors who were trying to help the vicitms, and squandered large amounts of money. This blog covered the story at the time.

What irks the SecGen is American dismissal of the UN as the final arbiter of what is right. Is it not interesting that neither he, nor Mark Malloch Brown, his egregious deputy, nor any other spokesperson for the UN and automatic opponent of the US (that terrible go-it-alone bully) ever produces any definite examples of a "functioning global system". Darfur? Srebrenice? The Balkans in general? Iraq? Iran? DR Congo and other African countries infested with "peacekeepers"? Rwanda? Take your pick, Kofi.