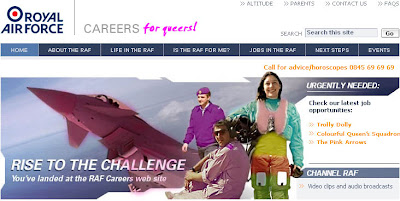 Reacting to this stunning piece of news, I don't think the Army has quite got the right idea (double click on the pic to enlarge). I suspect, like us all, they would prefer the MoD to be spending our money on things like helicopters, rather than, "tens of thousands of pounds on advertising in the 'pink' media."

Puts a slightly different complexion on the Queen's Squadron, though. I guess they'll have to change the position of the apostrophy.