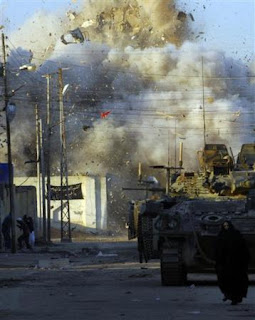 And soldiers complain about being underpaid? Well, some do, but look at the perks of the job – they get to blow up police stations. Pity though they have to go to Iraq to do it.

That, of course, is the lighter side of the story, but the engineers would not be human if they had not got a tremendous boost from successfully completing this particular piece of work.

The darker side is that this was the headquarters of the 400-strong serious crimes unit in Basra, the al-Jameat police station and prison. And it was there, in the early hours of yesterday morning, that the Army launched another of its mass raids – the third one that we know about – meeting resistance on the way in and killing seven "gunmen".

The raid came a mere three days after Friday's operation - which was said to be the first stage of moves to disrupt and disband the serious crime unit – when a "significant" member of the unit was captured. The action was taken on Christmas Day after it had been learned that some of the 127 prisoners held at al-Jameat faced imminent execution (the police station is pictured here - the photograph taken in August 2005, one month before major riots). They were found crowded into a small cell, living in "appalling conditions." A number had crushed feet or hands and gunshot wounds to the knee, compatible with their having been tortured. They were transferred to another police station. 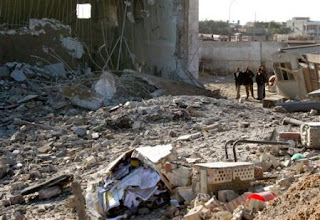 The explosives have been used, says the Army, "to put the building beyond use so it can no longer be used by the criminal enterprise." And, as television footage showed most of the building reduced to rubble with at least one police vehicle crushed and one lying upside down, the Army spokesman, Major Burbridge said - with not a trace of understatement: "The serious crimes unit has now been disbanded."

The dissolution has, apparently been approved by prime minister Nuri al-Maliki and the Basra governor, Mohammed Waili. Interestingly, Basra's police chief, Brigadier Mohammed al-Musawi, said he had not been told of the raid beforehand, and accused the British of trying to "stir up trouble". On the other hand, the Iraqi defence ministry in Baghdad said it had consented to the operation. 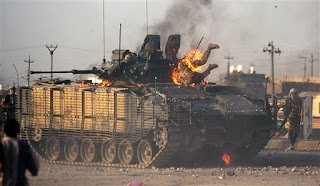 It is, we are told, no coincidence that al-Jameat was targeted. It was at the centre of the kidnapping in September last year of two SAS soldiers, the rescue of whom triggered major riots, producing the now famous pictures of soldiers leaping from a burning Warrior - and a breakdown of relations between the Army and the Basra police.

It was then, that September, when Times journalist Anthony Loyd wrote a piece headed, "Murder, violence and politics: how rogue police can live outside law in Basra".

According to Lloyd, the activities of the Jameat gang had been brought to the attention of the Iraqi government six months previously. Yet, even though allegedly funded by Iran and responsible for attacks on British forces, it was allowed to carry on with impunity. Its members remained at large and in uniform until yesterday – over 20 months after the problem had been recognised. Thus, while we must applaud this Christmas Day action, there is a real question as to why it took so long to do something of this nature. 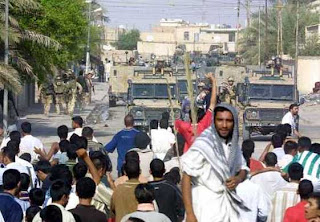 One indication might be that while, in September year last - when the Army broke into the compound to rescue the SAS men - major riots erupted, current reports from Basra indicate that the city is quiet. It is too early thus to infer that the action has the general support (or acceptance) of the population, but the signs so far are encouraging.

So, following the raid, as they tucked into their well-deserved Christmas dinners and were then able to rest, we hope, merry, the troops concerned might have pondered over the words of the carol, which reminds us that the baby Jesus was born "to save us all from Satan's power when we were gone astray." Their rest will be well-deserved.

In other developments, the US military has admitted it is holding at least four Iranians in Iraq, including men seized in raids last week. This is according to Gordon Johndroe, spokesman for the US National Security Council, who confirmed that two diplomats were among those initially detained in the raids. They were turned over to Iraqi authorities and released.

However, Iraq's Kurdish president, Jalal Talabani, has protested about the arrest of the diplomats, even though US officials say they were suspected of planning attacks on security forces. Nevertheless, we are told, "The president is unhappy." This is because the diplomats came to Iraq at the invitation of the president, "as part of an agreement to build better security links between the countries".