They have learnt nothing and forgotten nothing 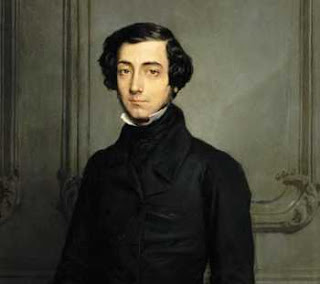 It is over 160 years since Alexis de Tocqueville, one of the most perceptive French historians travelled round the United States of America and wrote two volumes about the society he saw and analyzed. Among other matters he praised the liberty in the new country and, especially, the high level of individual involvement in public matters.

Well, it seems that the lessons have to be relearnt. According to an article in the International Herald Tribune another author, Frederic Martel, has been trying to figure out culture in America.

As we know, nobody in France (well, not in the French cultural and journalistic establishment) believes that there is any culture in the United States, despite the astonishing number of first class theatre companies, orchestras and serious periodicals per head of population.

Mais non, there is nothing but Hollywood pap and Mickey Mouse. M Martel, a former cultural attache has decided to do something about it. He has travelled round the vast country and produced a 622 page tome, entitled "Culture in America".

Now Martel, 39, a former French cultural attaché in Boston, has set out to change this. In "Culture in America," a 622-page tome weighty with information, he challenges the conventional view in Paris that (French) culture financed and organized by the government is entirely good and that (American) culture shaped by market forces is necessarily bad.

I suppose, it is a good sign that the reviews in the publications that are serious flag-wavers for French culture have been relatively positive and, at any rate, there is an inclination to debate the issues.

M Martel's conclusions were rather astonishing:

Martel then tracks the so-called culture wars, beginning with the cancellation of a Robert Mapplethorpe photography exhibition at the Corcoran Gallery of Art in Washington in 1989 over concerns about its explicit content, which led to congressional campaigning against the National Endowment for the Arts. Even today the endowment's budget is far below mid-1980s levels and, at just under $125 million for 2006, is roughly what the French government gave the Paris National Opera this year.

Still, what really intrigues Martel is how American culture flourishes despite the indifference or hostility of major government institutions.

And that leads him to the crucial role played by nonprofit foundations, philanthropists, corporate sponsors, universities and community organizations, which in practice do receive indirect government support in the form of tax incentives.

"If the Culture Ministry is nowhere to be found," he writes, "cultural life is everywhere."

Personally, I would say that American culture flourishes because of the indifference or hostility of major government institutions.

In an odd sort of way, M Martel comes to a similar conclusion.

"What really annoys me is the way our cultural elite uses ideology to protect its privileges," he said. "It says that our culture defines a certain idea of France, that the alternative is Americanization. But it's really only defending itself against the popular classes. We cannot have 10 percent of our population stemming from immigration and deny them their culture."

To promote grass-roots culture, then, he wants decision making to be deconcentrated. "The government will still finance the arts, but we don't need a minister defining culture," he said. "We need thousands of people defining culture. Power should flow bottom-up, not top-down. That's the debate I want to provoke in the new year."

He is getting there but is unable to imagine a cultural climate in which there is no government involvement at all (well, except for tax breaks or tax incentives, perhaps). Then again, how many people in this country can envisage a situation of that kind?