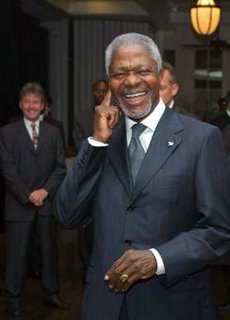 Undoubtedly, there will be many articles that will try to persuade us that SecGen Kofi Annan (father of Kojo) is basically a great and good man, who may have had the odd teensy-weensy weakness, perhaps being too nice to the people who work for him or too innocent for the wicked world he inhabits. In fact, the SecGen has tried to pre-empt his own political obituaries by making a shameless speech in Missouri.

It is worth spending a few minutes on a contemplation of the man's career and achievements. Fortunately a Wall Street Journal editorial has done it for us. It recalls that

When Mr. Annan was named Secretary General 10 years ago, he did so as the U.S.-backed candidate of reform. Jesse Helms, then-chairman of the Senate Foreign Relations Committee, told Mr. Annan that "if you choose to be an agent of real and deep-seated change, you will find many supporters--and even allies--here in the U.S. Congress."

Alas, Senator Helms's hopes and expectations were dashed and SecGen Annan is leaving the UN in an even worse state than he had found it, to a very great extent as a result of his own activity (or lack of) as head of peacekeeping operations with Rwanda and Srebrenice figuring as highlights and as Secretary General.

After summing up the various scandals of the Annan years, the article boldly shows up a difference in approach:

But the larger problem of Mr. Annan's approach is that, by insisting that only through the U.N. could the world act to protect vulnerable populations, he has made vulnerable people hostage to predatory regimes with seats at the U.N. and made it all the more difficult for the world to act. Compare the fate of the Kosovars--rescued from the Serbs by U.S. military action undertaken without U.N. consent--with that of the Darfuris, who are still at the mercy of militias supported by the Sudanese government in Khartoum, which has effectively blocked serious international intervention.

It is, as we have said repeatedly on this blog, the structure of the United Nations, constantly at odds with its stated purpose that is the weakness at the heart of the tranzi claims for moral, ethical and political superiority.