A whiff of panic 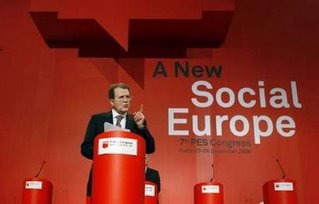 What's in the headlines these days? The one thing for sure - it isn't "Europe", as they insist on calling the European Union.

Hence the note of desperation bordering on panic in Romano Prodi's address to the European Socialist Group (PES) congress this week. (Draft text here.) "In order to get Europe back off the ground today we must not only be very convinced, but we must be equally convincing," he told delegates. "2007 must be the year for the re-launch of Europe." Prodi then goes on:

To give European citizens the response they want, we all know that there is a need for more Europe, not less. Therefore we must resolve political, institutional and financial impotence which at the moment is stopping Europe from responding as it did in the past to new needs of Europeans.

We know it, he knows it. The "project" is dying on its feet or, as Prodi puts it, it is suffering from "political, institutional and financial impotence." Yet, the only thing they know or understand is "more of the same", precisely the prescription that got them into that situation in the first place. Thus says Prodi, we must reject "the attempts and the proposals for a reduction in the Constitution".

And then the real agenda comes clear: "we must not give up indispensable improvements such as reinforcement in foreign affairs and the extension of the majority vote", adding, "It is the time for action. We must resume the process of integration on the right track."

Therein also is the recognition that the process of integration has stalled, and also the declaration of importance of the end point. "Europe" was never about the curvature of bananas and the technical harmonisation of automotive components. It was always about creating a "political Europe", one with its own foreign policy and armed forces, a Europe as a powerful international player, able to shape world events. 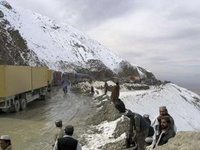 In this context, my overnight post was no accident. It was actually a political statement: the weather in an obscure Pakistani mountain path is, in fact, more important to us right now than anything going on in the corridors of "power" in Brussels. Does anyone remember this?

Mark this on your calendar: Spring of 2007 will be a bloodbath in Afghanistan for NATO forces. Our British, Canadian, Australian, Dutch, and other allies will be slaughtered in Afghanistan if they dare step off base in the southern provinces, and nobody is screaming at the tops of their media-lungs about the impending disaster. I would not be surprised to see a NATO base overrun in Afghanistan in 2007 with all the soldiers killed or captured. And when it happens, how many will claim they had no idea it was so bad and blame the media for failing to raise the alarm? Here it is: WARNING! Troops in Afghanistan are facing slaughter in 2007!

In retrospect, "Europe" probably blew it when the main players in the EU opted out of the "war on terror" and opted in to "soft power". By so doing, they consigned themselves to the margins of history, their credibility blown to shreds. Try as you might, once that has gone, it is virtually impossible to get it back. Prodi is right to panic.