A bunch of festering amateurs 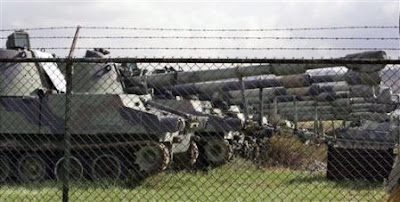 We went to great lengths to dissect the Qana pictures, alleging that the news agencies – and Associated Press in particular – were working to their own agendas.

But, in the above picture issued by AP, datelined 28 December, we have evidence of a darker, more disturbing secret, borne out by the caption which reads: "Old Bradley fighting vehicles line the grounds around the BAE systems plant in Lemont Furnace, Pa." 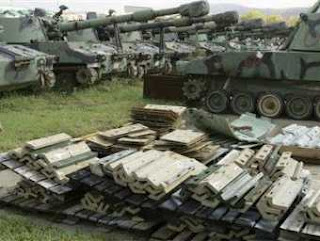 This and the picture here refer to a Sharewatch story, the lead paragraph opening:

The Bradley Fighting Vehicles, stripped of their treads, scarred and simply worn down from being driven long miles in harsh desert conditions, are the latest of hundreds refurbished or upgraded annually by their maker, BAE Systems -- one of many defense contractors whose business has grown throughout five years of fighting in Afghanistan and Iraq.

For reference, this is a picture of a Bradley, and here are details of something else.

What the pictures demonstrate is that, in AP, we have a bunch of festering amateurs. And, if they can't get simple, glaringly obvious details right, how on earth can we trust them with more politically sensitive information where the interpretation of a picture might rest entirely on the text of a caption?

The answer is given partly by Michelle Malkin, who is also having some fun with some photographs, partly by Little Green Footballs, and by others. And, if you need it spelling out, the answer is dead simple - you cannot trust anything the agencies produce unless the veracity is self evident from what is offered, or the detail can be independently verified.

The pictures are still up but there have been "silent edits". One caption now reads: "Piles of treads (tracks, shurely? - ed) are stacked on pallets around old military equipment that line the grounds around the BAE Systems plant in Lemont Furnace, Pa." The other is below:

Click on each picture, to show the "before" and "after".