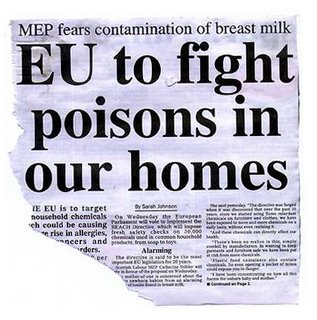 This is most definitely one for Tim Worstall, a headline on the EU's REACH directive which we have culled from the front page of the Scottish Sunday Post.

Although we have done the occasional piece on this, Worstall has made it one of his specialities, charting the inanities of this particularly malign piece of law – now coming to the end of the approval process.

Yet, despite the unarguable case for ditching the whole thing, here we get a Scottish newspaper (with good sales in northern England) churning out this mind-sapping propaganda. And the trouble is that most people – and certainly most legislators, and especially the brain-dead majority of MEPs – will actually believe that REACH is a good idea in principle.

In fact, for reasons which even the great Timmy has not explored, this law will actually do more harm than good. Based on the idea of "prior approval" it means that, once it is up and running, no chemical can be sold unless its producers have complied with a bureaucratic procedure which will attest as to its "safety".

The trouble is that, beyond acute toxicity, predictive modelling is a very poor indicator of safety, an issue we explored in detail last June and in November last year. Thus, approvals based on this process merely insulate producers from their responsibilities to their customers, creating a system where it is the regulator and not the consumer who must be satisfied before a product is marketed.

But, in this society of ours, careful argument is of nothing compared with the power of some idiot of an editor who can produce a front page of this nature. Come the revolution, therefore, it must be the "useful idiots" like these who must be the first to swing from the lamp posts.