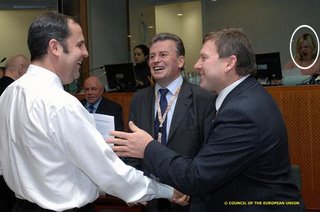 The EU Council yesterday refused to give the commission powers to force Austria to ditch its ban on two GM maize varieties which have been approved for use throughout the EU.

The picture shows a jubilant Josef Proell, the Austrian agriculture and environment minister (left), being congratulated by the Estonian environment minister after the meeting – a scene witnessed by an enthralled interpreter in her booth (ringed - see also enlargement, below right).

This is the latest step in a bizarre drama which has been played out ever since May 2000 when Austria drafted a Genetic Technology Prohibition Law, allowing its regions to declare themselves GM-free. 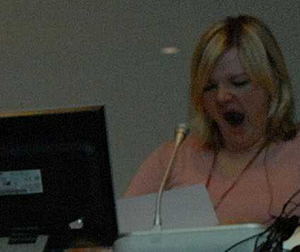 The EU Commission rejected the law but Upper Austria persevered, seeking to impose a three-year ban on the use of GMOs to "protect organic and traditional agricultural agriculture and to prevent hybridisation."

That case was referred to the European Court of Justice and, on 5 October 2004, the EU Court of First Instance ruled that Austria had failed to provide scientific justification for the measures, after the European Food Safety Authority (EFSA) published an opinion that stated that no new evidence for health or environmental risks was presented by the Region to justify its law.

Since then, the commission has been seeking powers to enforce the removal of the ban, for which it needed Council approval but, by a qualified majority, the Council has once again thwarted any attempts to bring the errant member state into line.

In a direct snub to both the commission and the court, the Council has declared that a member state has the power to restrict the use and/or sale of a GMO and that the different agricultural structures and regional ecological characteristics in the European Union need to be taken into account in a more systematic manner in the environmental risk assessment of GMOs.

On that basis, the Council considered there were sufficient grounds for rejecting the Commission's demand for new powers and that the use of the temporary precautionary measures was justified.

The campaigning organisation Friends of the Earth is delighted with the decision, but the commission, which went the extra mile in an attempt to accommodate Austria, is in serious trouble.

Its action is in response to a WTO finding that so-called "national GMO safeguards" are a breach of its rules – after a case taken by Argentina, Canada and the United States - leaving the EU as a whole in breach of its WTO obligations.

The commission was supported only by Britain, Sweden, the Netherlands and the Czech Republic and now the commission has to consider its next step, which could include a reference to the European Union Court, challenging the Council's decision.

Whatever the outcome, this is a major defeat for the commission and one that strengthens the resolve of the member states. Next in line are Hungary and Greece, where the confrontation could be repeated – with like result. If that is the case, Mr Barroso's commission will be taking on the aspect of a lame duck, presumably the single European lame duck.