Move on… nothing to see here! 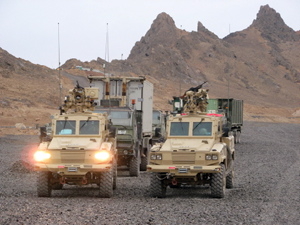 The caption to the picture reads: "A Canadian convoy leaves a forward operating base in Panjwaii district, Afghanistan on Wednesday. The convoys are favourite targets of Taliban suicide bombers." Note the RG-31s used as convoy escorts.

The story is equally graphic:

Adds McLeod, who had his worst day on the job during the first week in August:

(We) had a vehicle suicide bomber hit us and took out one of our tractor-trailers in the morning. Later on that day the convoy ended up getting mortared and they were blowing up all around us," he recalls. "Then on the way home in the evening we were ambushed by RPG (rocket-propelled grenades) and machine-gun fire."

If he'd been a British soldier, the chances are he would be dead or seriously injured. But hey! Why should a few lazy MPs be worried about details like that?

But you do wonder how they sleep at night.