Picking at a sore 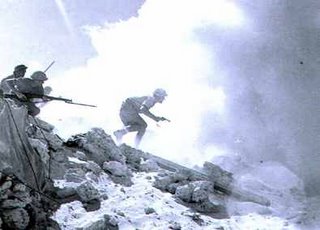 As Michelle Malkin continues charting the Jamil Hussein saga, as the latest step in AP's journey to perdition, she draws attention to a piece in The New York Post. This has Robert Bateman, an author, historian and Army infantry officer, recounting AP's fabricated reporting of the No Gun Ri incident during the Korean War.

Fabrications, of course, are as old as war reporting itself, and the photograph here is a classic example. Purporting to show Australian infantry attacking during the second battle of Alamein in 1942, it was entirely staged. To get the dramatic effect, the Aussies blew up their own cookhouse and then advanced into the smoke, the photographer Len Chetwyn recording the epic action for prosperity.

This type of photography is relatively benign, representing that which took place anyway but it was still staged – it represented the truth but it was not itself, literally the truth. Where thus lie the equally staged scenes at Qana, earlier this year? 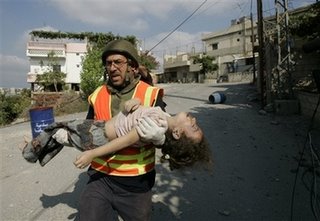 We are reminded of that incident by several of our readers, who have rushed to tell us that AP has produced a slideshow, eulogising the role of Salam Daher (aka Green Helmet) in the tragedy. With the title, "A gruelling task in Lebanon", the voiceover is provided by Lauren Frayer, a lady with a second name remarkably similar to that of Kevin Frayer, AP's star snapper who was at the scene, lapping up the gory details.

Perhaps the quintessential differences between the Alamein and the Qana was this. In the former, the photograph was quite obviously for propaganda purposes, taken by an obviously partisan source to project a specific message. In the latter, the pictures were taken by news agencies purporting to convey the objective truth. And it is that lie which offends. 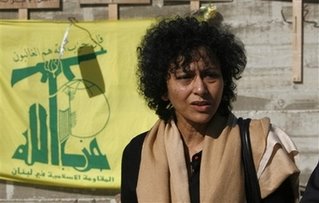 But, despite the whole conduct of the Qana shoot running totally contrary to AP's own editorial guidelines, we have seen not a hint of remorse or apology from the organisation. Instead, we see the tawdry slideshow which cements the lie into place – not lies by the subjects photographed but by the agencies. The simple fact is that the photographs were staged and the agencies will not admit this. Rather than do that, like a tortured soul in a padded cell, they pick at the wound, over and over, until it bleeds.

And they continue to do it. Published by the agency this week are two photographs of Irene Khan, Secretary General of Amnesty International, on a visit to Qana. In one (above left) she is seen posing in front of a Hezbollah flag while, in the other (right), she talks to a member of the Chalhoub family, with a montage of photographs of the incident, "Green Helmet" prominent amongst them. 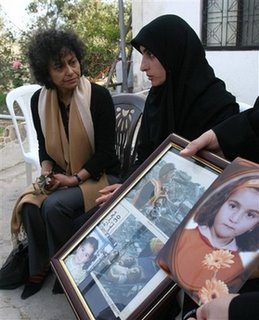 The Lebanon Daily Star has it that Khan said, "The truth about those massacres must be revealed," wiping tears from her eyes after meeting a few survivors of the strike. She is cited as saying that all investigations conducted by the group held clear evidence that what happened in Qana, "where civilians were slain while seeking shelter, and where the victims were mostly children," was an "obvious" violation of human-rights conventions. There's objective reporting for you.

One wonders whether Mz Khan would be so keen to pose in front of an Israeli flag, whether she would shed a tear or two over the Israelis who have been killed or whether AP's Mohammed Zaatari would be there to record that event. One also wonders whether AP, which is so keen to represent Hezbollah as victims, have noted this.