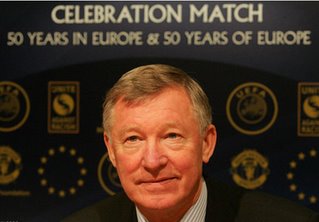 Karl Marx said that history repeated itself as a farce. Thus, he argued, the first Napoleon's 18th Brumaire was a great drama for France, even a tragedy. But Napoleon III's similar coup was merely a huge joke. Well, given the ending of the Second Empire, there might be some disagreement on the subject.

However, there can be no disagreement on the way the European Union copies, rather farcically, previous attempts at political and cultural propaganda. I have written several times about the role of sport, in particular, football in the early stages of the Cold War, mentioning it most recently when the death of the great Puskas was announced.

I have also mentioned in the past that the EU spent a great deal of time trying to emulate that propaganda. It did not really work then and it does not work now. But they try. How they try.

It has just been announced that, to celebrate the 50th anniversary of the European Union (well, the Treaty of Rome, to be quite precise) "Europe" will field a team to play Manchester United.

Why ManU, apart from the fact that it has the best publicity machine of all the English football clubs?

The celebratory event has been scheduled to mark the 50th anniversary of the Treaty of Rome which, on 25 March 1957, formally laid the foundations for a united Europe and the jubilee of United's involvement in the European Champion Clubs' Cup. United were the first English team to enter what has now become the continent's most elite club competition and their involvement, which was begun by Sir Matt Busby's 'Busby Babes' in the 1956/57 season, has run in parallel with the lifespan of the European Union.

Isn't it lucky that one has to make no decisions about whom to support?