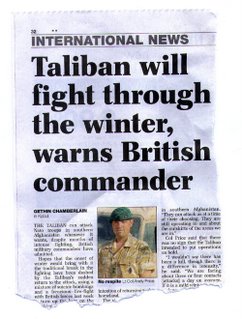 And today, 10 December, we see this illuminating headline in The Sunday Telegraph. Amongst other things, the piece says:

Hopes that the onset of winter would bring with it the traditional break in the fighting have been dashed by the Taliban's sudden return to the attack, using a mixture of suicide bombings and a ferocious fire-fight with British forces last week to turn up the heat on the coalition.

Yet, on 24 September, you could have read this:

As to the second issue, we have heard from a number of media and other commentators that, with the onset of winter, hostilities will slacken off, given Nato forces – and especially the British – time to re-group and rest.

However, as numerous accounts of the Soviet invasion show, this is a myth.

In the south – unlike the north – temperatures do not fall precipitously but the weather generally does make flying more difficult and dangerous, especially for helicopters. Effectively, for sophisticated armies, logistics become much more difficult and the balance of tactical advantage shifts to the insurgents.

Far from diminishing over the winter, therefore, Nato forces can expect attacks to intensify and, given the extreme difficulty the British already have in supplying their forces, we could see a major disasters just at a time when we are schooled by the media to expect it least.

The source of that piece? You guessed it. Is a quick "told you so!" in order?