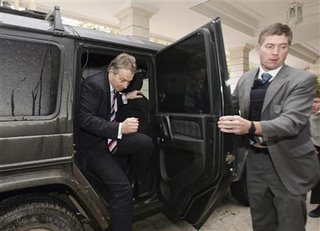 Blair, while he happens to be in the neighbourhood, has popped in to Baghdad to meet Iraq's prime minister Nouri Al-Maliki. He pledged his full support for Maliki's government and said that British troops would stay in Iraq "until the job is done".

If they hadn't already suffered enough, Blair later went on pay a pre-Christmas visit to the British troops deployed in Basra, his fifth trip to a British military base in southern Iraq.

There, he told troops that it was vital to "stand up and fight" for people of tolerance and moderation. One assumes he was not talking about his own government.

Meanwhile, Frence defence minister Michele Alliot-Marie was in that other war zone - Afghanistan. There, just as British, Canadian, US and Afghan troops are preparing a major offensive in Kandahar, she has announced that France will pull out its contingent of 200 special forces at the start of 2007.

The troops have been deployed since 2003 in support of the US-led Operation Enduring Freedom and are not part of the main 32,000-strong NATO-led International Security Assistance Force in Afghanistan. In Kabul under Nato command are some additional 1,100 French troops and, we are told, these will remain. 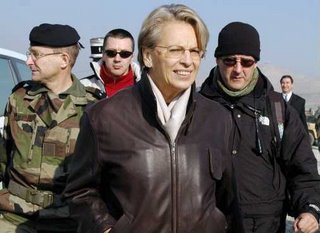 Nevertheless, Alliot-Marie is no fool and neither is her boss, president Chirac. They cannot be unaware of what they are doing. At a time when Nato and, more recently US senator John McCain are urging Nato (and especially European nations) to shoulder more of the burden in Afghanistan, the decision to withdraw troops sends an unmistakable message.

It also seems to fly in the face of a resolution made at the European Council on Friday, when leaders pledged to do more to help Afghanistan stamp out the insurgency. "The EU stands ready to intensify its efforts," said the communiqué.

For once, "the EU" does not seem to include France and, with Blair in Iraq giving a completely different message, the divergence of interests could not be more evident. This is not an EU that is going places on the word stage.