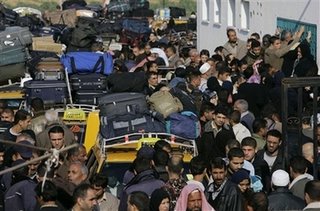 According to AP (not, I believe, relying on “Captain” Jemil Hussein this time) has reported that the UN is asking donor nations for another enormous hand-out to the Palestinians.

The problem is, as our readers will probably recall, that there was a moratorium placed on the Palestinian government receiving aid until and unless they agree to a few conditions, notably the recognition of Israel’s right to exist and the cessation of constant attacks on that country. There was no condition laid down along the lines of “and why don’t you stop fighting each other and get on with some work instead of destroying those fully working greenhouses the Israeli settlers left behind”.

In fact, humanitarian aid has continued to pour into both Gaza and the West Bank, which means that the money the Palestinian government did acquire (and for all the huffing and puffing the Arab governments have not come up with the sort of sums the Palestinian government says it needs) could be spent on salaries for themselves and their supporters and, above all, guns and ammunition. For a people who are catastrophically poverty-stricken they seem to have an awful lot of Kalashnikovs, katyushas, quasims and … well, fill in your own favourite weapon here.

David Shearer, head of the U.N.'s Office for the Coordination of Humanitarian Affairs, seems unimpressed by these arguments. Instead, he has once again appealed to the donor nations to solve the economic and social crisis in Palestine. To be accurate he has asked for $453 million, three quarters of which will be “earmarked for job creation, cash assistance and food aid”.

Quite separately, it seems, the UN is also asking for money to shore up Palestine’s education and health systems. One wonders whether in return for shoring up the education system the UN will demand that the Palestinians stop brainwashing their children into wanting to be suicide/homicide bombers and will no longer put out seriously anti-Semitic material, such as the Protocols of the Elders of Zion. I imagine not. After all, the UN would not want to interfere with the local culture, would it.

On the other hand, there seems to be some divergence in opinions. For instance, the acting Finance Minister, Samir Abu Aisha, has said that the Palestinian government has stayed afloat because of money coming from Arab and European countries. (Incidentally, the PA has moved ahead of the PLO in one respect. The late unlamented Chairman Yasser Arafat had no finance minister and no budget. The PA does have an acting minister, though, it would seem, no budget. Can’t have everything.)

But even Samir Abu Aisha acknowledges that there may be the odd problem or two. For instance, there is Israel’s reluctance to hand over the tax revenues to be used on further weapons to attack them. Shame on them.

The Europeans are also a problem. Although the EU aid to Palestine has increased by 27 per cent this year, it was not going to the government (when it exists which is not always). Instead, it was being directly to the Palestinian people as humanitarian aid.

Well, clearly, this is not something the Palestinian government likes. “The European money goes in ways we don't want it to go.” Quite right. None of these pesky humanitarian causes. Send the money where it makes sense: to the many arms merchants.

Incidentally, where will the money the UN is trying to raise (assuming it succeeds) go? To the government or the people of Palestine? Past experience tells one that there is quite a large gap between the two.