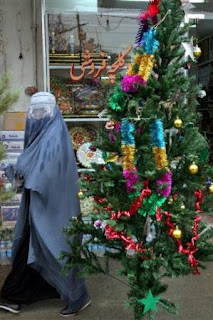 There is hope for us yet. The picture shows a scene in downtown Kabul - one of several shops that have been selling fully decorated Christmas trees in a predominantly Muslim community - making a fascinating contrast with the lady fully kitted out in the Burka. But was it staged - or did the lady just happen past as the AP photographer took the snap?

That apart, if there is a message here, it is that the human spirit will surely prevail. But perhaps the real message is that, despite the wails and laments about the commercialisation of Christmas, it is surely commercial activity which actually brings the festive cheer. In other words, only because there's brass is there Christmas - you simply cannot keep free enterprise down. 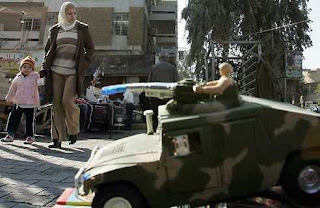 Much the same surely has to be said of this market - in downtown Baghdad, selling Christmas toys. And, if there is a potent symbol of the US occupation, it just has to be the Humvee... so what do we see but a toy Humvee on sale. Once again, free enterprise knows no boundaries.

That said, I don't know whether there is a hidden message in the toy soldier manning the machine gun. Whatever, else, he is not American, so, I suppose, insurgents can always pretend it is a captured Humvee and honour is satisfied.

One thing for certain though - there is no uncertainty about our message from myself and my colleague. That is quite simply, Merry Christmas. We'll think about the New Year a little closer to time.

Actually, nothing is that simple. With all the people who voted us best UK blog, the congratulations flowing in, the incredibly nice e-mails we've been having of late and the best wishes and other pleasant comments on the forum, it is getting incredibly difficult to keep up our standards of obnoxiousness (if that is a word) and aggression that people have come to expect.

Nevertheless, Helen managed to utter a "bah Humbug!" just as she went off-line. In the brief period left to me before I am overtaken by the spirit of Christmas - and before the antidote kicks in - I guess I could echo that.

Christmas Day is the one day in my year when Mrs EU Referendum - who is the secret power behind the throne - insists, on pain of death, that the computer does not go on. So that will have to do for now. Normal hostilities will be resumed after the break.

Email ThisBlogThis!Share to TwitterShare to FacebookShare to Pinterest
Labels: Christmas