The destructiveness of aid 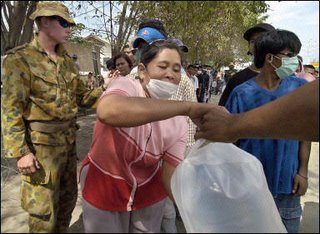 Well now, try to recall what happened afterwards as the lumbering transnational organizations and NGOs moved in, making sure that their own staff was well looked after and started collecting money. Some of us refused to donate to anything that looked like an NGO because of the doubts we had of their efficiency and of the money reaching the necessary targets.

Others were once again overwhelmed by compassion and hoped against hope that this time round it will all be different. Since then we have had various news about aid going astray, carefully collected material slowly disintegrating in Oxfam and other NGO warehouses; of NGOs refusing to work with the reasonably efficient Indonesian army because they disapproved of it politically; of governments refusing to help matters along and putting up so many bureaucratic barriers as to make the distribution of aid and charity almost impossible.

Of course, these are not the only reasons why aid is destructive. There is the small matter of the local economy, which is undermined by free hand-outs. Then there is the question of what is the government money that is released by the lack of need to supply basic services used for. We know the answer to that question in Gaza.

Now news comes from Aceh, a somewhat atypical province in Indonesia, where Islam is considerably more severe and extreme than in the rest of the country.

Tsunami aid sent to an Indonesian province has freed government funds for the lashing of women for purported violations of Islamic law, a report said Sunday.

The story, reported in the Sunday Times this week, was picked up by UPI and a number of blogs, such as The American Thinker. The question is, will we remember any of the details the next time those collection tins are brought out?