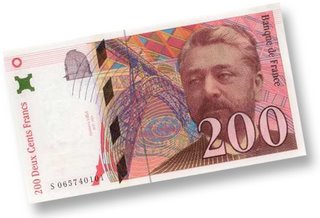 Oh, what fun in a sad sort of a way. French premier Villepin – so Ambrose Evans-Pritchard is telling us from his garret in the Telegraph business section – is attacking the ECB amid calls for a return to the franc.

What was that about dead man walking? If the French are breaking ranks, le projet has to be in serious trouble.

Anyhow, Dominique de Villepin, who the Telegraph helpfully informs us is the French prime minister, has launched an all-out attack on the European Central Bank, calling on eurozone nations to assert political control over the euro and reclaim their economic sovereignty.

This he did on French radio as the euro surged to fresh records against Asian currencies. Said Villepen, it was time to "lay everything on the table" and set the proper limits of ECB power. "We must clarify matters in exchange rate policy, which means taking back our sovereignty and our margin for action so the states can play their part."

This, writes Ambrose, is a clear reference to Article 111-2 of the Maastricht Treaty giving EU finance ministers the power to shape the exchange rate. Known as the "nuclear option", it gives politicians the means to dictate policy to the ECB - since the exchange rate is an indirect lever over interest rates. It would in effect strip the bank of its cherished independence. No EU national leader has ever before threatened openly to invoke the clause.

Sadly though, it is not Villepen who is calling for the return of the franc. This comes from Nicolas Dupont-Aignan, a presidential candidate of whom no one (i.e., me - ed) has ever heard, a man who is unlikely to garner many votes.

Nevertheless, he is described as a "major Gaulliste" and in turn is describing EMU as "unreformable", leading to a monetary squeeze that was driving the French economy into slump.

"Like Molière's doctor, the ECB is killing the patient in order to cure it. Given their obstinant (sic) refusal to face up to errors, it is time to prepare for a return to our own national monetary system," he says.

All this comes after a grim set of data showing French growth ground to a halt in the third quarter - hit by sliding exports and a severe downturn in the French car industry and another fall in industrial orders – while the euro is hitting fresh records against the yen, almost reaching yen155 yesterday.

The strength of the euro has now become a top theme in the French elections, prompting almost daily attacks on what is being termed the "monetary masochism" from Frankfurt.

And this, it appears, is just for starters. Ambrose tells us that it usually takes two years or so for the full effects of exchange rate changes to feed through an economy, so the French industry will not feel the full impact of the strong euro until late next year and into 2008. He suggests that the political storm in France is just beginning.

I do love that phrase "monetary masochism" and it really does put the stories about reactivating the EU constitution into perspective. French sentiment is no longer blindly in favour of European political integration. And while Merkel may be making cooing noises about it, every leader in the run-up to their country's EU presidency does likewise. But, as with Blair, delivery there is not. The bubble has burst.

What really makes the difference here is that the EU could progress as long as France saw its own goals and those of the EU as one and the same. Increasingly though, as "monetary masochism" begins to bite, (French) national and European interests will diverge.

Hold onto your seats, ladies and gentlemen. We are heading for an interesting ride, to misquote the old Chinese curse.