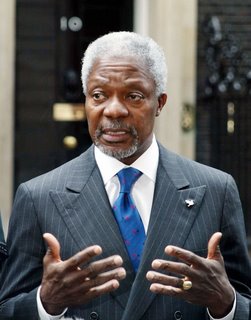 What a wonderful example we have here of the difference between the rigorous MSM with its intellectually independent and hard-hitting hacks and the sloppy bloggers who are eternally predictable in their triviality.

Extreme Mortman (a new one for me) links to the last press conference given by SecGen Kofi Annan (son of Kojo and brother of flat-owning Kobina) and quotes some of the hard-hitting questions asked by the hard-nosed, investigative journalists (hint: Claudia Rosett was not there).

Here is one very fine example:

Gosh, the sheer professionalism of that. The independence of thought!

So what do you suppose are the odds that Helen Thomas or David Gregory will treat President Bush this same way during his final press conference?

We all know the answer to that and the words chance and cat and hell spring to mind.

Never mind President Bush. Think of what that pack of hard-hitting, serious and fair-minded journalists have done about Laura Bush having a minor operation for a common form of skin cancer and ... gasp ... not telling the journalists about it. Makes one proud that the world has such a responsible and thoughtful dead-tree media.