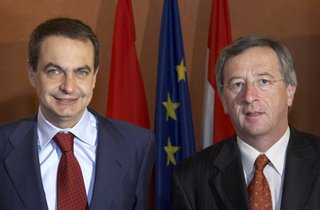 Something we didn't pick up from the general media is a report on an English language Spanish site which headlines a piece: "EU summit on the European Constitution set for Madrid in January".

We are told that, at the "European Summit" (i.e., Council) on Friday, Spain and Luxembourg announced a joint initiative to try to recover the idea of a European Constitution. The prime ministers announced a new EU summit between the 18 countries which have already ratified the document, to be held in Madrid on 26 January.

These were Spanish prime minister, José Luis Rodríguez Zapatero and the failure of Luxembourg, Jean-Claude Juncker, the man whose one aim in life is to see his bébé come out of intensive care.

How instructive it is, though, that Blair, immediately following the European Council, jetted off to Egypt – with a brief stop-over in Turkey - in a bid to resolve the growing Mid-East crisis. He went not as a plenipotentiary of the EU, nor as one of an EU "troika" or whatever other grouping they tend to go for. He went as Tony Blair, prime minister of the United Kingdom. 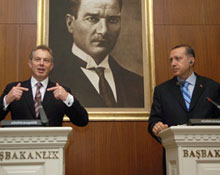 Furthermore, how interesting it is was, while in Turkey, Blair met his counterpart, Recep Tayyip Erdogan and talked not of Turkey's (failing) bid to enter the EU but of how to revive peace negotiations between Israel and the Palestinians (not that that is possible if the latter are determined to rip themselves apart in a civil war).

Thus do the "little Europeans" condemn themselves. With their obsessive navel-gazing, they are not only boring us all to death but highlighting the pathetic vacuity of their agenda and their irrelevance as world players.