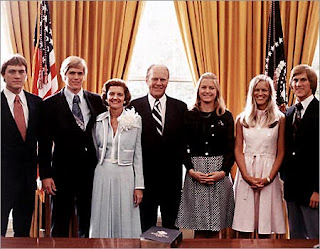 As my colleague abandons his Christmas cheer and wallows in toy stories – past and, above all, present – I shall turn attention very quickly to the man, whose death was announced yesterday, Gerald Ford, the 38th President of the United States.

Until now there were two things one always remembered about Ford; one is that he was the only President who had not been elected either to the presidency or the vice-presidency and the other is LBJ's comment about him. There are two versions of the latter, both indicating LBJ's low opinion of Ford's intelligence. Either he said that Ford was so dumb he could not walk and chew gum at the same time or, and this is much more likely, that he could not fart and chew gum at the same time.

Now we have a third piece of information: as of last month he was the longest living American President.

All of which is a little unfair on a decent, upright, reasonably able man who did the best he could in difficult circumstances. Becoming Vice-President after Spiro Agnew's resignation in October 1973, he took over as President when Nixon decided not to face probable impeachment and resigned in August 1974.

Taking over after Watergate, Ford did a creditable job of moving the country back more or less onto a steady course, though the hysteria generated by Nixon has survived and poisoned American politics to this day.

And that is about all one can say in Ford’s favour. While I can grasp that Gerald Ford is still remembered with a good deal of personal respect, I cannot understand the mawkishness of the blog entry on Hot Air and the comments on it. A good man does not a good president make.

His appointment of the ultra left Nelson Rockefeller as Vice-President was a disaster. The economy under him continued to lurch between inflation and recession with the government trying to counter the problems caused by OPEC-raised oil prices by ever more taxes and controls.

When it came to foreign policy, Ford was definitely of the "let us be nice to the Soviets and maybe they will be nice to us" persuasion (though one could never doubt his patriotism). Of course, neither the Soviets nor the Chinese had the slightest intention of tickling the West's tummy if it rolled over. A swift kick where it hurts most was the usual response.

SALT talks resulted in the Soviets constructing SS20s in Eastern Europe. On the other hand, the Helsinki Accords, intended to be another surrender to the Communist world view, unexpectedly proved to be a useful weapon against oppression in that world and, consequently, aided its destabilization.

Helsinki Watch strengthened the dissident movement in the oppressed countries by making the plight of individuals who had courageously stood up for basic rights and liberties public in the West and giving politicians like Reagan and Thatcher weapons in their fight. Its successor, Human Rights Watch, is a considerably less useful organization.

Above all, however, Ford’s presidency is linked to the most appalling event in the West’s fight against Communism: the betrayal of South Vietnam and Cambodia. In 1974 the American troops began evacuating from South-East Asia. The Thieu regime was given strong promises of military aid if it continued the fight. The aid did not materialize. 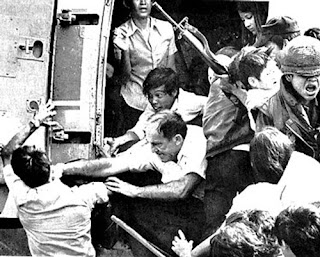 North Vietnam, having effectively lost the war previously, now overran South Vietnam and at the end of April, 1975 Saigon fell. The "realists" and the media, which had induced the "Vietnam war" hysteria, had triumphed. Vietnam and Cambodia entered years of totalitarian oppression and genocide, while in the rest of the world the West and its ideas of freedom and democracy seemed in retreat.

To be fair to Ford, his narrow defeat by Jimmy Carter in 1976 turned out to be an even bigger disaster. Now there is a man about whom one might say many things but one will suffice: the worst and least successful president in the history of the United States.