What does it matter? 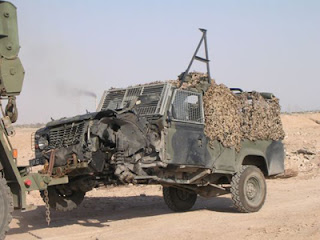 According to the MoD, another soldier has been killed in Afghanistan. So far unnamed, he was on a reconnaissance mission in the desert to the south of Garmsir, when his vehicle was involved in an explosion. As well as one fatality, there was one serious injury and two minor injuries.

At this stage, says the MoD, it is too early to say what caused the explosion but there were no Taliban in the vicinity and there was no follow-on contact. The thinking is that it could possibly have been a "legacy mine" left over from one of the earlier wars, which the troops were unfortunate enough to have hit. Lieutenant Colonel Andy Price, of the Royal Marines, suggested that a deliberate attack was unlikely, as the explosion "was in the middle of the desert." 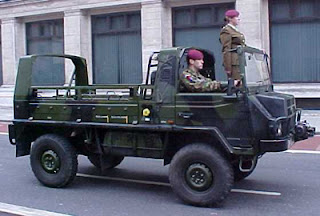 No details have been given by the MoD of the type of vehicle involved. But, with that number of troops involved, it was most likely either a Land Rover or a Pinzgauer (pictured right).

Even if it was an unarmoured Land Rover, though, a mine strike is survivable – evidenced by the remarkable photograph of a Land Rover Wolf (above left), after being hit by an anti-tank mine just north of Basra, in June 2004. In a Pinzgauer, however, the chances of the driver and/or front seat passenger surviving are significantly reduced as they are seated immediately over the wheels and, therefore, take the full brunt of the blast.

In this incident, it seems that the blast caused a loss of control, whence the vehicle crashed, that being responsible for the death. On that basis, the vehicle involved may well have been a Land Rover, possibly a "Snatch", which often carries a crew of four. 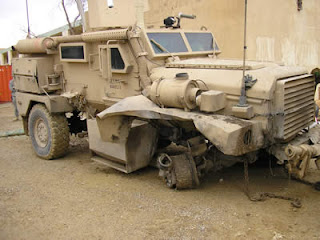 To guarantee survival, though, the troops would have to be equipped with a mine protected vehicle, such as this Cougar (now deployed by the US in Afghanistan), from which the crew emerged unscathed. And which vehicles are being supplied to British troops in Afghanistan, to replace the Land Rovers?

Given that we are talking about the MoD, the answer should be obvious. They are sending out lightly armoured Pinzgauer Vectors. But then, does it really matter if a few more soldiers are killed? Gerald Howarth thinks Pinzgauers are "superb".