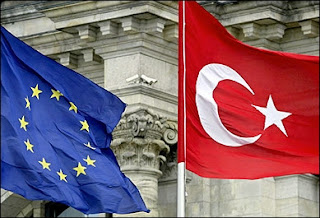 As we approach the entry of Romania and Bulgaria into the European Union (boy, is that going to be fun!), some people are turning their attention to Turkey. As it happens, Turkey's possible entry has been pushed even further into the future with the Commission part-freezing the negotiations, allegedly because of Turkey's refusal to deal with the question of Cyprus but, really, because the EU is getting cold feet about that country.

Though, as we have said before, if the EU wants its own army, it has to have Turkey in. Who else has enough well-trained, well-equipped soldiers? Poland and Turkey can form the backbone of the European defence force. There's a wonderful historic irony for you.

Yesterday evening I was in 18 Doughty Street, waiting for my turn. I was about to take part in a discussion about counterfactual history with several other contributors to "Prime Minister Portillo and Other Things that Never Happened" and "President Gore and Other Things that Never Happened". Well, since you ask, the two essays I had written were: "What if Lenin's train had never reached Petrograd" and "What if the Czechoslovak army had fought in 1938".

While waiting for our programme I listened to the discussion before it, mostly about newspaper stories, that involved the presenter and two others: Russell Walters of the Democracy Movement and Greg Clark MP (he of the Polly Toynbee idea).

What intrigued me was the efforts made by both discusants to demonstrate that taking in Turkey would be a good idea because it would prevent any further integration and would make the EU shallower. To be fair to the presenter, he did remind them of the same comments and promises being made before the East European countries came in and none of that had materialized. In fact, it is the East Europeans who have to adjust their hitherto reasonably successful economies to our own high-tax, high-regulation ones. And, as some of us predicted at the time, those adjustments are playing havoc with the economies there.

In fact, what we said at the time was that each enlargement was accompanied by greater integration as it was impossible to run ever more and ever more diverse member states together without centralizing more powers. The big one into Eastern Europe was used for huge steps forward with integration in the Treaties of Amsterdam and Nice and even bigger ones attempted with the Constitution for Europe.

All of this seems to have passed by a number of the commentators, who are known as eurosceptics. The truth is that it is not enough to be called a eurosceptic. One also has to have some knowledge on the subject.

So, next time somebody says that taking in more countries, particularly Turkey would result in a shallower European Union, here are a few questions to ask;

Does this mean that the leaders will call another IGC and change the treaties to restore a number of the existing EU competences to the member states? In particular, will they rescind the Social Chapter, a subject apparently dear to the Boy King's heart?

Does this mean that there will be a change to the treaties (through an IGC, which is the only way to do it) and vetoes will be reintroduced in a number of areas that are now legislated on according to qualified majority voting?

Does this mean that the ECJ decision in the Van Gend & Loos case of February 1963, which determined that European legislation is superior to national, something that has been written into the European Communities Act 1972?

Will there be a change to the treaties (through an IGC etc etc) and the Commission's role as the sole initiator of legislation within Pillar I will be changed?

I have an odd suspicion that the answer to all those questions will be firstly a blank stare, secondly a number of throat clearances and stammered nothings and, thirdly, a reluctant no. Well, in that case, how is the European Union going to become shallower?