No hope, no hope at all 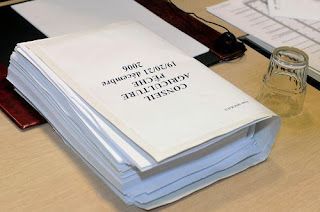 Every fibre of my body rebels at the thought of having to write a critique of the latest fisheries resolution to come out of Brussels. The illustration shows the sheer bulk of the crippling paperwork which no one fully understands and few read fully – with mistakes more common than not in the text.

And it is this paperwork which is killing the fishing industry. As I wrote last year, it is a cruel irony that the last formal EU ministers' meeting of the year is the fisheries council, at which the fate of fishermen throughout the EU – but especially in the UK – is decided for the coming year. 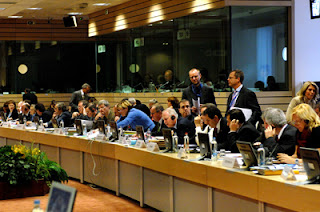 The cruelty comes, I wrote, because it is the time at which the crucial decisions on quotas for the coming year are made, under the Common Fisheries Policy – a policy which is not only morally but also technically bankrupt – invariably bringing woe to hard-pressed fishermen, just at a time when everyone else is preparing for the Christmas festivities 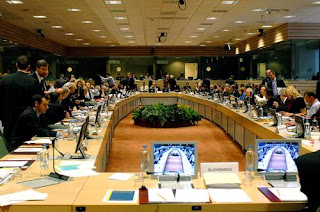 For as long as I can remember, each year I have been marking this ritual, the killing fields of the Brussels council chamber, where they participate in the slow, inexorable execution of the British fishing industry. And there comes a point where you simply cannot bear it any more.

One could, of course, prattle on like Charles Clover, who laments that "the fish always lose", a facile comment if ever there was. But then he gets paid to do it. In fact, it is all of us that lose, the whole nation, as we see an industry which could be worth £3 billion plus ground into oblivion, currently worth about half a billion and declining each year. 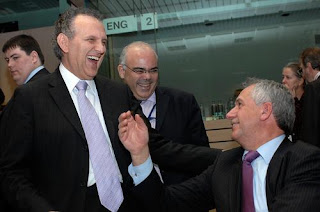 It says something at least that, as they take part in the destruction of an industry, two of the "colleagues" are cheerful. Shown here are Photis Photiou, minister of agriculture of Cyprus (left) and Hans-Christian Schmidt, Danish minister of agriculture. It says something that the agriculture minister of Cyprus has a say in the management of British waters, but the ultimate farce, or insult if you prefer, is below (left) – Joe Borg, the Maltese fisheries commissioner, the man in charge of British fishing. 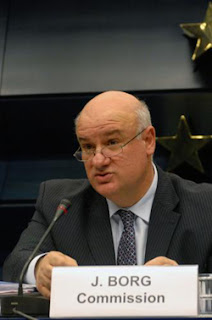 You can pick your coverage – Google News has nearly 200 reports – from which this is a representative sample, here, here and here.

As the man from Scotland says, "it's another nail in the coffin", while that brainless fool Ross Finnie twitters - as he always does, every year – "I think it's the best deal there was available." If the "colleagues" stripped his shirt and underpants from him as he walked out of the Council chamber he would still say the same.

Of all the comments I have read, though, the one I prefer comes from the BBC website, citing Dr Bryce Beukers-Stewart, Fisheries Policy Officer for the Marine Conservation Society. He says:

It is astounding that the EU continues to persist with this doomed approach to fisheries management. These marginal adjustments to the quotas for cod around the UK have been going on for at least the last 20 years, but the fish stocks themselves are going down much faster. This is hardly surprising, as the quotas still allow for at least 60 percent of the fish to be removed each year - what chance does that give for recovery? 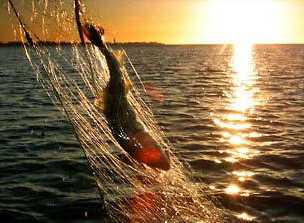 What is needed, he says, is a much more creative and proactive approach to improving the selectivity of fishing gear and practices to reduce the bycatch of unwanted or under-fire species such as cod.

Of course, there was such an approach proposed by the Conservative Party, which was gathering strength until the current leader junked the policy.

The light at the end of the tunnel is a huge express train, the letters “EU” emblazoned on it front, bearing down on us. There is no hope for the fishing industry, no hope at all. The picture above says it all: as the sun sets on the industry, the "Single European Fish" is now that much closer to reality.

Photos: Council of the European Communities.