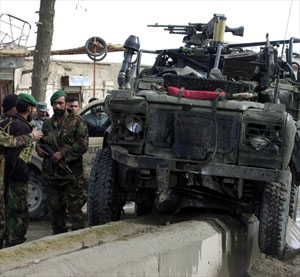 Although it did it on 23 November, the Telegraph yesterday revisited the story of the defective ammunition sent to Paras in Afghanistan, at some length in the print edition.

Only in the online edition though did it manage a more detailed account of the suicide bombing incident which we reported yesterday.

What is curious though is how much outrage was exuded by the Telegraph over the defective ammunition (although it quietly forgets its original charge that the MoD had bought ammo on the cheap). That is fair enough but, in the final analysis, no lives were lost and the problem was quickly rectified.

Yet, over the attack which sent three Royal Marines to hospital - one seriously injured - there seems to be not the slightest hint of outrage that British troops were sent into Kandahar in an unarmoured, open-topped vehicle. 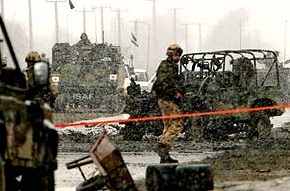 Nor indeed is there any recognition that this is not the first time British troops in an unarmoured vehicle have been attacked in this way.

The apparent lack of concern is also despite the paper acknowledging that Kandahar has been the scene of the majority of the approximately 105 suicide blasts reported in Afghanistan this year - with more than 217 Afghans and 17 foreign (mostly Nato) troops having been killed. Furthermore, the bulk of soldiers over term have been killed while riding in unarmoured or lightly armoured vehicles, including three soldiers in British military Land Rovers (including the incident illustrated above).

Since there had already been three suicide bombings in Kandahar last week, with three Nato troops and an Afghan civilian having been killed, all the evidence pointed to the singular fact that sending troops in unarmoured vehicles through the town – regarded as a Taliban stronghold – was foolhardy to the point of being grossly irresponsible.

Why is it, therefore, that no one seems to be giving the government a hard time?