Riding for the fall 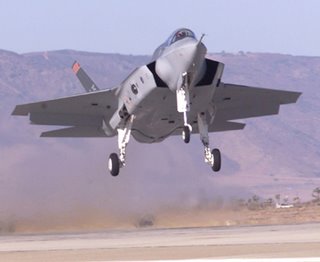 We've been speculating that the UK might drop it since last January, but the "source code" issue has been going on for years. We first mentioned it on this blog in June 2004.

But now the mighty Times has picked up the issue and has Tony Baldwin from Washington telling us that the project is at risk again, with Lord Drayson on his way over to the capital "in an attempt to save a collaborative deal with the Americans".

This, of course – as you can see from the pic – is yet again the Joint Strike Fighter – described by The Times as "the most expensive military programme in history" at £140 billion. And Britain, we are told, has once again threatened to pull out of its £10 billion purchase "if the US refused to share secret computer technology needed to maintain operational sovereignty over the Armed Forces" – the so-called "source codes" which enable the computer systems to operate.

This was supposed to have been settled in June of this year at the Blair-Bush summit - sort of. But then it went very quiet – never a good sign – and now we are back, it seems, where we started.

However, the deadline of 31 December is looming – when the UK must either sign a Memorandum of Understanding (MoU), committing it to going ahead with the deal or it must pull out altogether. But British officials, we are informed, are telling The Times that, following the Blair-Bush summit, there has been "no breakthrough — or even any sign of one — because the Americans have been preoccupied by Iraq and the mid-term elections".

Complicating the analysis is the delay in the carrier programme and the knowledge that chancellor Brown is seriously short of money, giving rise to rumours that he is set on cancelling a big defence project. Should he be "forced" to pull out of the JSF, that would open the way to a cheaper deal with the French, buying the Rafale, or to cancelling the project altogether.

There is, therefore, a distinct possibility that the UK would be happy that any negotiations should fail. The posturing of "British officials" might simply be attempts to create an alibi, transferring the blame onto the Americans.

As it stands, though, the US does have good reason for not trusting the British completely and, in that context, the situation has not changed dramatically since we reported on it in February of this year.

There is one change though, which could prove significant. The government has not – as I suspected it might – joined the French "Neuron" advanced UCAV programme and has instead funded BAE Systems to begin development of a British system.

That might reassure the Americans that there is less likelihood of there being technology leakage to the French and onwards, although we are still far too close to the French on a number of other projects, where onwards leakage to the Chinese and or the Russians is a distinct possibility.

However, such subtleties are way beyond the capability of the MSM to understand, so you can expect plenty of ill-informed prattle on the issue.

Already, The Times is referring back to its shoddy piece of work on the Europhile Kendall Myers and one now wonders whether his lecture – and the apparently spontaneous appearance of correspondents from two national dailies - wasn't a set-up, aimed specifically at setting the scene for a failure of the JSF negotiations.

How convenient it is to have a low ranking academic working for a Europhile organisation - yet still described as "a senior analyst at the US State Department" - describing our special relationship as "totally one-sided" with no "payback" for Britain at all. When the alternative to the JSF deal is for Britain to go down either the French or the European route (or both), the idea of a Europhile stitch-up, postulated at the time, begins to look highly plausible.

The Times is also quoting an unnamed Ministry of Defence source, saying that, "If we can’t trust the Americans to provide this, then you would have to ask what else we should be doing with them in defence terms." He is cited as saying that a failure on the JSF would also raise questions over the deal under which Britain needs US help to replace its Trident nuclear missile system. 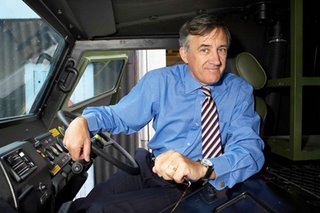 While this might be as reliable as an AP story based on information from Capt. Jamil Hussein, we have the House of Commons Defence committee bleating on the issue, as well as shadow defence spokesman Gerald Howarth (he of Pinzgauer fame - pictured) also demanding unconditional release of the source codes. Thus the government might feel fairly secure about pushing the Americans into a rejection and then walking away with minimal political fallout.

The best bet is – in an issue which is Byzantine in its complexity – that our own government, for its own reasons, is setting up the US. Furthermore, it has been doing so for some time, simply to escape from commitments it cannot afford, without having to admit that this is the case. In other words, quite deliberately, it may be riding for the fall.