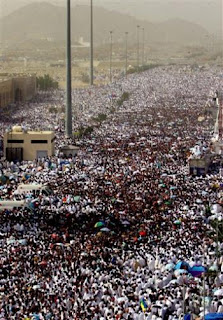 From multiple sources, including The Times, the consensus seems to be that Saddam will be despatched from this earth while we in the UK sleep soundly in our beds.

But there are those amongst this lot at the Haj - more than two million pilgrims crowding on to Mount Arafat, near Mecca, in Saudi Arabia, praying for Muslims around the world - who are complaining that the timing is "insensitive". There are fears that there may be a backlash. 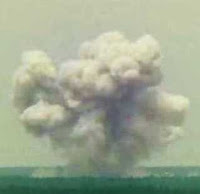 But, if it gets out of hand, I suppose there's always this. Interestingly, with the initials MOAB, it is known as the "Mother Of All Bombs" - rather appropriate under the circumstances. We have the technology to put an end to a very large number of lives, very quickly and, on that basis, the fact that these people are still alive is a testament to the restraint of the Western powers.

But it need not always be like this. The Muslims need to believe, methinks, that we would use one - or several - of these bombs if we are pushed too far. And it might serve to concentrate minds if we let it be known that the Haj would not necessarily be considered immune. They, like us, should know fear.