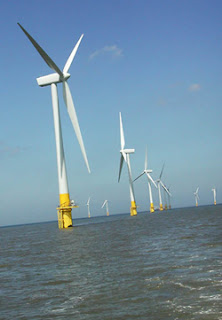 Like the tower blocks before them, the wind towers are another mass delusion. A letter in The Telegraph tells us why:

Sir – Once again the public are being misled by the wind industry. These windfarms, which are going to cover over 100 square miles of the approaches to the Thames Estuary, will never power one third of London homes.

If as suggested the installed capacity of the 400-plus turbines is 1.3 Gw (1300Mw) then even with a generous load factor of 30 per cent the average output will only be 390Mw. This would in fact be enough to provide 5Kw to 78,000 homes, about enough to power an electric kettle and a toaster. If, as there frequently is, a high pressure system is sitting over south-east England, then there will be zero output from these windfarms. The claims about carbon dioxide savings are equally dishonest. Using widely accepted data the annual, theoretical savings of CO2 for these turbines would be approximately 1.46 Mt and would reduce global levels by a farcical 0.005 per cent.

What your readers really need to know is that these windfarms will receive approximately £160 million per year in subsidies, paid for by them. This windfarm scandal has gone on long enough and needs to be exposed for what is. We are destroying our landscapes and now our seascapes for nothing more than green tokenism, and are being expected to pay for it as well.

The tragedy of it all is that, had we not been lumbered with the Green Moron, the Conservatives could have exposed the stupidity for what it is, and gained some real political brownie (instead of greenie) points.

Much of the "green agenda" is a bubble, waiting to burst. Cameron has got on the bandwagon – to mix metaphors – just at a time when the wheels are about to fall off.