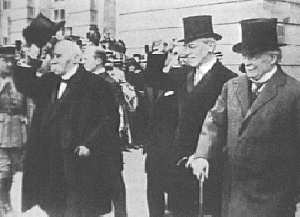 I found this in Margaret MacMillan's excellent "Peacemakers", an account of the 1919 Paris Conference and the attempts to reshape the world. We are still living with many of those decisions, though it is fair to say that often the negotiators's decisions consisted of acquiescence in what happened on the ground of the many far-flung corners of the world they were trying to organize.

The Supreme Council managed to choose a secretary, a junior French diplomat who was rumoured to be Clemenceau’s illegitimate son. (The extraordinarily efficient [Sir Maurice] Hankey, the deputy secretary, soon took over most of the work.) After much wrangling it decided on French and English as the official languages for documents. The French argued for their own language alone, ostensibly on the grounds that it was more precise and at the same time capable of greater nuance than English, in reality because they did not want to admit France was slipping down the rankings of world powers.

French, they said, had been the language of international communication and diplomacy for centuries. The British and Americans pointed out that English was increasingly supplanting it.

Lloyd George said that he would always regret that he did not know French better (he scarcely knew it at all), but it seemed absurd that English, spoken by over 170 million people, should not have equal status with French.

The Italians said, in that case, why not Italian as well. "Otherwise," said the foreign minister, Sonnino, "it would look as if Italy was being treated as an inferior by being excluded".

In that case, said Lloyd George, why not Japanese as well? The Japanese delegates, who tended to have trouble following the debates whether they were in French or English, remained silent. Clemenceau backed down, to the consternation of many of his own officials.

As their revenge they insist that all EU documents be published in French first, even though there are far more members who use English as a second language than French-speaking ones. It all adds to the gaiety of nations.