An institution in decay 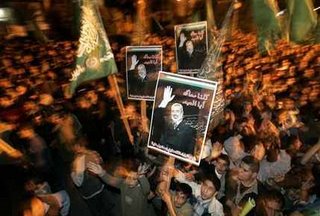 Sometimes it is difficult to tell whether it is real, or just a false perception, reflecting your own prejudices and sensibilities. But the recent theme of this blog that the European Union is a failed, decaying political construct does seem to have some substance.

Read for instance, this extract from a recent Reuters report concerning developments in Gaza:

Gunmen fired two mortar bombs at Palestinian President Mahmoud Abbas's office in Gaza on Sunday, wounding at least five members of his personal guard as tensions with the ruling Hamas movement threatened to boil over.

Foreign Minister Mahmoud al-Zahar, a senior Hamas leader, accused Abbas's forces of attempting a "military coup" in Gaza after they overran two ministries under the control of the Islamists.

Zahar demanded the security men leave the ministries or else be arrested, a move that could provoke further violence. "What is happening is a real military coup, assassinations, attempted assassinations, the occupation of headquarters and ministries," Zahar told a news conference.

Now read an extract from this report from EU Observer, headed: "Chirac suggests bell to cut off 'endless' summit talks". It begins: 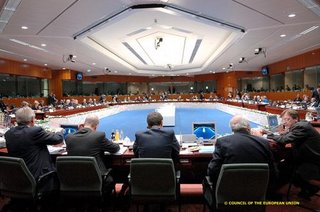 Several EU leaders on Friday complained about the gruelling so-called tours de table which sees every member of the 25 - and soon 27 member - union have a say on the final wording of the summit conclusions.

A bullish president Chirac told journalists after the meeting that he had given chancellor Merkel, who will from January chair the EU for six months, small "advice" to "limit the speaking time of everyone to three minutes." "It is impossible for the council [EU leaders' meetings] that we speak endlessly while always saying the same," he said. 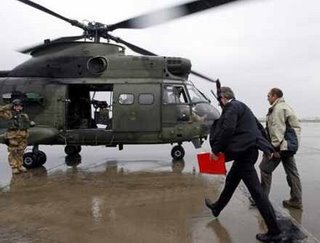 In my view, there are just too many threads coming together for this blog's thesis to be ignored. When, with so much going on in the world, leaders of the EU member states find their own creation "boring", we know it can only be a matter of time before the construct crashes and burns.

For sure, the EU is a huge apparatus, staffed by thousands of rent-seekers and supported by a massive salariat which depends for its position and influence on EU action. But readers may recall that in September we wrote a piece about how even the bureaucrats were complaining about the bureaucracy. Now their bosses are also complaining.

Looking at the "action man" picture above, showing Blair leaving Baghdad yesterday for Basra, to address "his" troops, you can quite see why he wanted to get away. Let's face it, being boss of your own country is so much more fun.